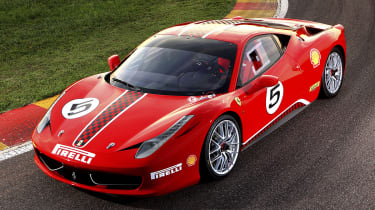 Ferrari has revealed its 458 Challenge racing supercar. It’s the motorsport version of the excellent V8-engined 458 Italia, which we reviewed on video last year. And that irresistible, hi-revving 4.5-litre unit remains largely intact. Its 562bhp maximum (at 9000rpm) is identical, though some gearbox modifications ensure higher torque levels at lower revs. There’s also a new suspension set-up, with solid aluminium bushings, stiffer springs, single-rate dampers and a 30mm lower ride height. Super-strong Brembo brakes (from the Ferrari 599XX) sit inside new 19in, centre-nut competition wheels which are wrapped in Pirelli slick rubber. A host of weight-cuts feature, with thinner body panels and liberal use of lightweight materials, such as carbonfibre and Lexan. It bodes well for a potential 458 ‘Scuderia’ special… Also standard on the 458 Challenge – firsts for a Ferrari track special – are the firm’s E-Diff electronic differential and the F1-Trac traction control system from the road-going supercar.

The car will compete alongside the F430 Challenge in 2011’s Ferrari Challenge Trofeo Pirelli season, and with its 1min16.5sec Fiorano lap-time trumping its predecessor by two seconds, you’d fancy its chances.