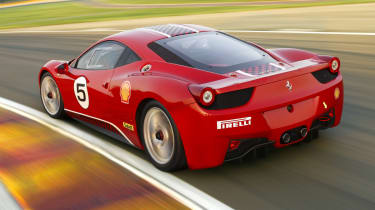 Ferrari’s new racing car – the striking 458 Challenge – has been out completing track tests. It’s the motorsport version of the new V8 Ferrari supercar, the pretty excellent 458 Italia (evo’s track test video here). While the Challenge car uses an identically-powered 562bhp 4.5-litre V8 engine, the dual-clutch gearbox has been tweaked to allow more torque from less revs. The road car’s E-Diff electronic differential remains intact, the first time Ferrari has used such technology on one of its track cars. There’s also been a host of weight cuts and a stiffer suspension setup, which includes a 30mm ride-height drop.  And it impressed Ferrari’s test drivers – Italian Maurizio Mediani and Argentine Jaime Melo – who took it around the Vallelunga test track near Rome. While Ferrari is unlikely to go public with testers’ negative feedback, Melo particularly proved helpful, as he pilots an F430 GT2 racer in the American Le Mans Series, making him ideal for evaluating its successor. He liked the addition of those trick electronics, claiming ‘I am sure that Prancing Horse competition owners will be very pleased with this car’. The 458 Challenge’s racing career kicks off in 2011, when it will race alongside the F430 Challenge in the Ferrari Challenge Trofeo, having already lapped Ferrari’s Fiorano test track two seconds faster than its predecessor. Read our last Ferrari 458 Challenge racer news story