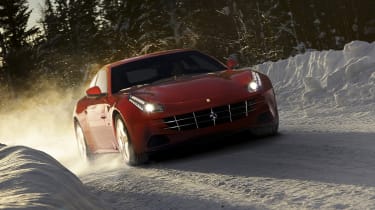 Meet the shock new Ferrari FF, a replacement for the 612 Scaglietti.

As well as being the first four-wheel-drive Ferrari, it’s described as the company’s most versatile four-seater ever, and has unexpectedly been unveiled with best in class cabin space and boot capacity figures. It’s not a hardcore supercar to sit above the Ferrari 458 Italia, then; it does, though, come with a typically potent power source under that long front bonnet. Powering all four wheels for the first time is a naturally aspirated 6.3-litre V12 direct injection engine, with 651bhp (at a typically howling 8000rpm) and 504lb ft of torque. Those figures are enough to hustle the 1790kg FF (dry weight) from 0-62mph in a claimed 3.7sec, while the top speed is a distinctly supercar-esque 208mph. Though aiming for that four up and full of luggage is probably ill-advised… With Ferrari’s HELE stop-start system fitted (as debuted on the Ferrari California), CO2 emissions are 360g/km while the FF will achieve 18.3mpg. Ferrari’s first all-wheel-drive system, patented 4RM, is said to weigh 50 per cent less than a conventional setup, helping maintain close-to-ideal weight distribution (47/53 front/rear). It works in tandem with the car’s numerous electronic dynamic control systems, adjusting torque distribution between the four wheels depending on conditions and terrain. The FF also boasts a magnetorheological damping system and carbon-ceramic Brembo brakes. FF is an acronym of Ferrari Four, signifying its seat and driven wheel count. At 4907mm long, 1953mm wide and 1374mm high, it’s almost identical in size to the V12 four-seater it replaces, the rear-drive Ferrari 612 Scaglietti. With its rear seats down, though, it boasts almost three times the boot capacity (800 litres) while with the seats up (450 litres), it can hold more than a Renault Scenic. The Ferrari FF makes its world debut at the 2011 Geneva motor show in March, when we can expect further details, including cost and on-sale dates. We’d wager FF production to begin in 2012, though, with prices around the £250,000 mark.

Debate the new Ferrari FF on our Forum