With 661bhp and 560lb ft of torque, the 488 GTB does the supercar performance piece with considerable ease: 62mph arrives in a claimed 3.0sec and the GTB will go beyond 205mph. But it’s the 8.3sec 0-124mph time that drops your jaw; that’s three tenths quicker than a Lamborghini Aventador LP750-4 SV, a tenth up on a McLaren 650S and two seconds quicker than an F40. Yes, you read that right – two seconds quicker than the hallowed twin-turbocharged V8 1980s hypercar.

What makes the 488’s performance stand out is how it delivers its turbocharged energy. The engine’s torque delivery is controlled by variable torque maps, with one for the first three gears, individual maps for fourth through to sixth, and a further map for seventh, where all 560lb ft is delivered at just 3000rpm. 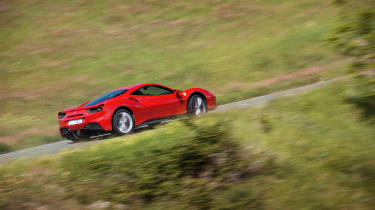 The variable mapping allows for on-demand acceleration. Even in fourth gear at 35mph the 488 GTB will alert your senses, have you tightening your grip on the wheel and make you give a little wriggle in the seat just to make sure you’re perfectly positioned to read the road ahead. The rate at which it arrives at the big numbers on the digital speedo is hard to register. Surely that’s kph, isn’t it? It’s not? Bugger. Better give a little lift. Actually, make that a big lift.

As impressive as the torque-rich delivery is, the real fireworks are when you run through all seven gears. The first three ratios are dispatched in a blink, the fingers on your right hand at risk of contracting RSI so soon after each other are the shifts required. Not that the acceleration tails off as you pull back for a fourth time, it’s just you have maybe a second longer to wait before needing fifth, then a similar length of time before sixth and seventh have you questioning your sanity as to why you’re travelling this fast in the first place.