The new Ferrari SA Aperta is a 661bhp, limited edition 599 convertible. Pictures and details of the stunning new supercar here 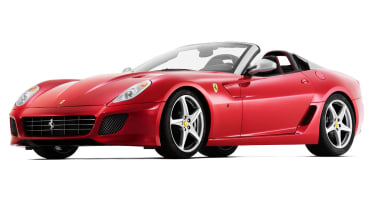 This is the Ferrari SA Aperta, effectively an open-top 599 GTO supercar. It’s been rumoured and hinted at for some time, and a public reveal will finally take place at the 2010 Paris motor show next week. Think of it as a modern-day take on the 550 Barchetta, with a light soft-top to cover the cabin that is designed only to be strung across the car’s opening in extreme conditions. And we wouldn’t like to be stood in a torrential downpour trying to fit it into place. It boasts the 599’s usual front-engine/rear-drive layout, with the uprated GTO engine, a 6-litre V12 with 661bhp and 457lb ft of torque. The suspension is lower than a standard 599's, while the bodyshell has been reinforced to make up for loss in stiffness due to the lack of roof structure. Just 80 will be made, and all are already sold, despite a price tag expected to top £400,000 once UK taxes have been added. Five will make it here, just 15 cars heading to Europe. All will be left-hand drive while each SA Aperta will be absolutely unique, says Ferrari, with an abundance of colour and trim combinations inside and out. And if you’re wondering about the name, the SA represents design firm Pininfarina – whose 80th birthday this car celebrates – the father and son team of Sergio and Andrea’s initials used. Aperta translates as Italian for ‘opened’. The Ferrari SA Aperta will be unveiled at the 2010 Paris motor show. All of our Paris show news is here.