The 599XX that was auctioned off by Ferrari to benefit the victims of the Italian earthquake, has been handed over to its new owner 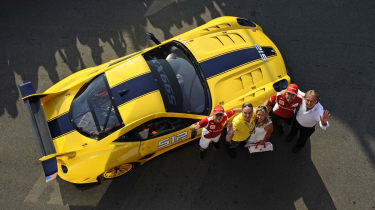 Following the tragic earthquakes that struck the north-Italian Emilia Romagna region back in May, Ferrari held an online auction with proceeds benefiting those affected by the tragic event. The auction featured many items from Fernando Alonso and Felipe Massa, but the star lot was a 599XX donated by Ferrari – with full proceeds going to charity.

The 599XX was sold for €1.4m (£1.12m), and a special ceremony was held at Monza during the Italian Grand Prix weekend, with Ferrari president Luca di Montezemolo, Fernando Alonso and Felipe Massa all present to officially hand the 599XX over to its new owner, Californian Google executive Benjamin Sloss.

Sloss and his wife were handed the keys to the 599XX, but as with all of Ferrari’s Corse Clienti cars, the extreme circuit racer will stay with Ferrari at the factory – to be transported to circuits around the world.