With more power, less weight and a host of enhancements, Ferrari’s new 430 Scuderia promises to take the F430’s performance to a new level 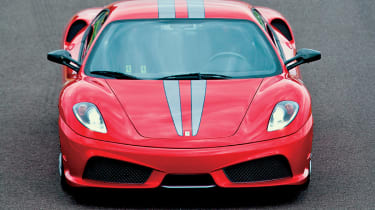 There’s a temptation to think that, because the new 430 Scuderia is about 100kg lighter than its F430 stablemate and is aimed at a track-bound audience, it’s merely a stripped out pseudo-racer. Sure, the radio, speakers and some of the soundproofing have gone and there are pieces of moulded carbonfibre where denser material would be found in the standard car. Yet this is so much more than an F430 lite.

Look at the carbon-ceramic brake discs for evidence of this. And look at the front ones in particular, for no other reason than that they are so impressively large (398mm in diameter compared with 380mm for the regular F430) that they barely fit behind the wheels. When you study them from very close quarters you may notice that the material they’re made from seems slightly different in a narrow ring where the disc meets the hub. That’s because the ring is pure carbonfibre, which better resists the stresses of repeated high-speed, high-temperature retardation that you get during track work.

It’s that level of attention to detail that has helped the Scuderia to lap Ferrari’s 1.8-mile Fiorano test track 1.5sec quicker than the standard F430. In fact, apparently it’s as fast as an Enzo around the iconic circuit, which in turn makes it the fastest ‘mass produced’ Ferrari to date, although on longer tracks the 599’s extra power gives the bigger car the edge. No hard and firm performance data – beyond such lappery – has yet been announced, but Ferrari’s engineers are happy enough to leak a 199mph top speed and 0-62mph in ‘less than 3.6sec’.

The name ‘Scuderia’ is Italian for ‘team’, and anyone with anything to do with the project, including product development director Roberto Corradi, is keen to stress that ‘it really has been a team effort’. Not that Ferrari is beyond pushing one team member’s name more often than most: Michael Schumacher. Apparently our man with the bulging trophy cabinet put in quite a few development miles and also suggested – in an echo of what we at evo have said in the past – that the suspension control be divorced from the workings of the traction and stability controls. So, unlike with the F430, in the Scuderia it’s possible to dial-up maximum attack mode for the gearshift, stability and traction controls yet still enjoy a relatively compliant ride, which should enhance its suitability for British roads as well as being a benefit on wet circuits.

Schumacher may or may not have also proposed upping the horsepower, but it’s of little surprise given the nature of the car that there are a few more ponies in the paddock. Peak power from the quad-cam V8 rises from 483bhp to 503bhp, the increase due to a revised carbonfibre intake system being fed more air, modified pistons that feature re-profiled crowns, a higher compression ratio (up from 11.3:1 to 11.75:1), and a lightweight sports exhaust system with a single silencer and tailpipes repositioned to keep them out of the revised underbody airflow.

The torque curve is also a beneficiary of the changes, a quick peek at Corradi’s internal Ferrari document revealing that it is substantially fattened up between 3000 and 4000rpm, peaks slightly higher than in the F430, and keeps its advantage, albeit to a lesser degree, all the way to the red line.

Already you can sense what a full-on project the Scuderia has been, but there’s more. The F1 paddleshift gearbox has had a major upgrade involving both its hardware and software, one result of which is that the time taken to nip between ratios has been cut from 150 milliseconds to just 60 – providing you have at least 5000rpm on the dial and the throttle pressed more than halfway down (which, let’s face it, will probably be most of the time). For comparison, the FXX bangs through its shifts in 80ms, while Ferrari’s F1 cars have got it down to 30-40ms.

Another engine enhancement that is perhaps less relevant to the UK than parts of the world where fuel quality isn’t all that it could be, is a spark advance management system. The system has been tested on the FXX and features a separate sensor for each cylinder to detect if detonation is taking place too early in an individual cylinder. If it is, it adjusts the spark accordingly, improving engine efficiency when octane levels are low or fuel quality is poor.

As in the F430, the ‘manettino’ switch on the leather and carbon steering wheel allows you to alter the parameters of the F1-Trac traction and stability control system (it also has a bearing on the engine management and the E-diff electronic differential), but it now offers a greater range of adjustment. An additional setting after ‘Race’ allows you to turn off the traction control independently of the stability control, leaving dialling out the stability control as the final act on your journey to gizmo-free motoring.

As mentioned earlier, the suspension settings are no longer inextricably linked to the other electronic driver aids, so you now use a separate button (on the console between the seats) to decide for yourself whether you want the compromise or extreme damper settings.

The E-diff has become more sophisticated, too. As well as now being linked in with the F1-Trac system, it is also in direct communication with the engine- and gearbox-management controls, so that the Scuderia’s whole vehicle dynamics package operates as a single entity. According to Corradi, the Scuderia has ‘about 40 per cent better traction out of corners than the F430’. He adds: ‘Through the esses near the bridge at Fiorano it is now possible to go through without lifting – in the F430 you definitely have to lift.’

Corradi also asserts that, regardless of the driver aids, the Scuderia’s chassis is ‘very well balanced’, thanks in part to a 15mm drop in ride height and the adoption of titanium springs, and also because the newcomer enjoys the same 43:57 front:rear weight distribution as the F430. However, there’s another reason for the Scuderia’s handling prowess, especially on the circuit, and that’s its aerodynamic set-up. Lessons learned from the FXX about underbody air management have helped out here, although there are also a few visible changes. The front spoiler (in a new plastic that, while not quite as light as carbonfibre, also isn’t as expensive to manufacture or replace if you have an ‘off’) features larger vents for the oil radiators, while the edges of the vent apertures are subtly shaped to sweep air down the side of the car.

The shape of the central vent has also changed to ram air more effectively under the car and improve the ground effect. It works in league with a revised venturi at the rear that now has three fins per side instead of two and also incorporates exit vents for the ducts that cool the gearbox and clutch. (The intakes for these ducts, located in the sills, have also been enlarged.) Thanks to all these elements – and with a little bit of help from a slightly larger lip spoiler on the tail – the underbody aero package creates 310kg of downforce at 186mph (300kph), which is 30kg more than the F430 can muster. And, as a by-product, the rear view of the Scuderia, with all its additional black mesh and fins, has more of a look of the track about it.

Back at the nose, the vents ahead of the front wheelarches have an airflow-taming strake that also adds to their looks, while the front wings are marginally broader to accommodate wheels that have grown 10mm in width. According to Corradi, this ‘makes the front end more responsive’ as well as giving more roadholding. Those lightweight alloys will be available in the gunmetal colour pictured here, gold, black or white and are lightly coated in Scuderia-specific Pirelli rubber. On the subject of colour, our photographic car was painted in a red metallic said to be as near as dammit the same as that of the latest Ferrari F1 cars.

There’s not quite the same single-minded purpose to the cabin, more a spirit of pragmatism. Carbonfibre door panels and bare alloy floors, but plush-looking Alcantara trim for the facia; hi-fi and speakers kicked out (but on the options list), air-conditioning and airbags retained; four-point harnesses and a roll-hoop (the latter optional), but reclining backrests for the seats. Some of these anomalies are legislative – no airbags, for instance, then no American market – and some are simply because, although Ferrari is aiming to produce a purists’ driving machine with the Scuderia, it also wants to attract the largest possible audience. And some of that audience would be put off by fixed-shell race-style seats that position you almost bolt-upright, while those in hotter climes simply don’t buy cars without air-con. If you want a full-on race car experience, goes the thinking, you can always buy an F430 Challenge. Besides which, once you’re installed behind the wheel of the Scuderia, squeezed by the seat’s substantial bolsters, held in place by the harness and about to prod the starter button, the last thing you’ll be thinking is ‘I really wish they’d stripped out more of the cabin fittings.’

Ferrari’s assertion that the Scuderia should be regarded as a distinctly different machine to the standard F430 is far more credible than it might seem at face value. There isn’t an area of the car that hasn’t been enhanced in some small way, and there are some parts that have been upgraded in large ways. We’ll have to wait until after the car’s official launch at the Frankfurt show on September 11 before we can drive it, but it will be fascinating to see what effect the changes have wrought on the F430’s dynamic chemistry. Anyone taking bets on evo Car of the Year 2007 yet?