The Fiat Panda 100HP may be small but it punches well above its weight. Here’s what to look for if you want some affordable Italian fun 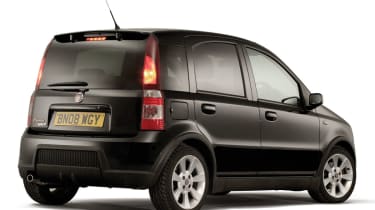 We spoke to Paul Brunskill at Fiat Auto Specialist Team (FAST) and Paul Wright at F for FIAT, who highlighted the known issues so far.

The 1368cc ‘FIRE’ unit is reasonably robust but, according to Paul Wright, the coolant needs looking after. ‘The anti-freeze concentration and coolant levels must be kept up to date, otherwise the engine has a habit of head gasket failure.’

Paul Brunskill adds that the timing belt tension should be checked at the third service (at 36,000 miles)and if it requires re-tensioning, then replacement is the preferred option.

There are no known major issues with the transmission, although the Panda, like much of the Fiat range, does tend to go through clutches more quickly than cars from other manufacturers.

Brunskill says that most Fiat gearboxes leak slightly where the sections of the casing are joined. As a rule, slight leaks don’t cause problems, but be wary of heavy leaks here.Suspension, brakes, etc

Many owners report wheel alignment problems with the Panda, and according to Paul Wright it isn’t the only Fiat with this issue. ‘The tolerances for the tracking tend to be quite loose compared with some other brands,’ he says. Front tyres can wear unevenly even when the tracking is within the stated tolerances, so a check and a re-set to take it close to the centre of the allowed range tends to be the usual cure.

Wright says that leaking dampers can be a problem, too. ‘There is a weld in the damper that tends to rust and fail, causing the seals to leak. This could be an MOT failure, as well as affecting the ride quality.’

The Panda’s rear suspension bump- stops are poorly attached from new so tend to fall off regularly. Again, this could be an MOT failure if they come loose, but it’s a straightforward fix.

One of the biggest criticisms of the 100HP is the electrically assisted steering and the degree of assistance provided. Many believe there isn’t enough steering feel, even in Sport mode. Worse, the technology involved can also give rise to problems. Paul Brunskill explains: ‘The steering column is surrounded by the motor that provides the assistance, as well as the position sensor and the ECU for the system. Any of the three can fail.’

Brakes can also be quite noisy, particularly when reversing. However, a quick and easy fix is to add some copper grease to the back of the pads when re-fitting them. A set of modified pads from a Punto can also cure the problem. Bodywork

The quality and quantity of paint on the Panda leaves something to be desired, so stones that might ordinarily bounce off the bodywork can easily chip down to bare metal.

Driver seats can show signs of wear quickly, particularly in the lumbar region. There’s a padded metal bar running across the seat back and if the padding becomes loose, the bar can pierce the seat covering.

There are also some issues with the electrics (for example, one known fault is where the headlights switch off when the indicators are used), so check everything works.

The Panda 100HP has never been an expensive car. Today a new one lists at £11,005, but you can easily find just-registered examples with delivery miles for less than £10,000. A 12‑month-old car with low miles is likely to be priced under £8000, and if you go another year older you should be looking around the £6000 mark, particularly through a private seller. The earliest 100HPs, from either very late 2006 or early 2007, can be picked up for less than £5000. That’s a lot of fun for your money.

*All prices correct as of January 2011