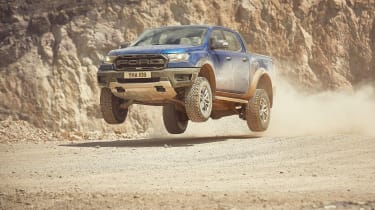 The Ford Ranger Raptor is to reach the UK next year, Ford has confirmed, bringing British buyers a Baja-style performance truck for the first time. Despite our propensity to put the pickup truck firmly into the commercial vehicle category, customers in other markets, chiefly the US and Australia, have made this type of ‘lifestyle’ pickup big business for their manufacturers.

The current T6-generation Ford Ranger, in its standard form, has been in production since 2011 and has proved to be a big success for the manufacturer globally, and has now been transformed into its ultimate Raptor form based on the - frankly awesome - F-150 Raptor from the US. 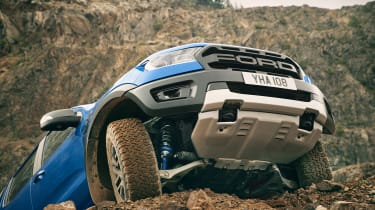 Like the rest of the Ranger line up, the Raptor will be built in Thailand, but the chassis and powertrain development was completed by Ford’s Australian engineering arm and features plenty of inspiration from its F-150 counterpart.

Developed by Ford Performance, the company calls it ‘A motocross bike, snowmobile and an ATV rolled up into a pickup truck’, and its styling is heavily influenced by the F-150 Raptor, from the shade of blue in these initial images to the wide Ford lettering on the grille and the chunky alloy wheels and off-road tyres.

The bumpers and arches have been flared to take account of the larger rolling stock and the Fox Racing Shox long-travel suspension, while a sizeable skid plate and re-engineered ladder chassis are better suited to the difficult terrain the Ranger Raptor is designed to tackle. 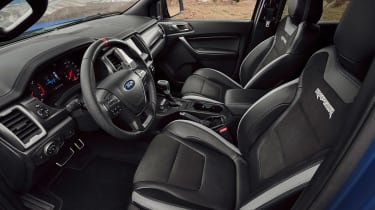 Among the safety and infotainment features offered on the Raptor (like those of most modern cars), Ford’s Sync satellite navigation system also has a “breadcrumb” mode, allowing drivers to effectively lay a trail in the navigation over unmapped terrain.

Although the Ranger Raptor might seem to have limited appeal in the UK, it has so far attracted a six-month waiting list in other markets, and is a doubtless unique entity here in the UK for those looking for a tough truck.