From three-door homologation special to the four-door Sapphire Cosworth, here’s everything you need to know about the Sierra RS Cosworth 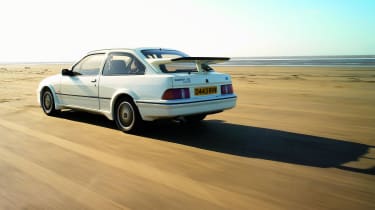 Following 20-or-so years of turning regular work-a-day saloons into rally and race winning machines that were just about attainable for regular Joes but lusted after like supercars by the public at large, upping its game was going to be a difficult task for Ford. But in 1985 it created what has arguably become the most iconic fast Ford ever, the Sierra RS Cosworth.

The less-than-subtle Sierra Cosworth wasn’t just a wild-looking road car, it was a car designed and built to win races. The 1980s Group A regulations required that 5000 units needed to be built to homologate a car and allow it to compete, so in the tradition it had set with the Lotus Cortina and RS Escorts, Ford took its then un-loved Sierra and made it suitable for competition.

Despite the monumental wing protruding from its tailgate, the most significant part of the hot Sierra was its 2-litre turbocharged four-cylinder engine. As such, Cosworth - the engineering firm that developed the engine - made its way into the car’s official name. 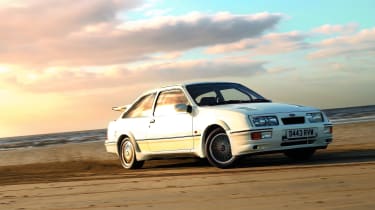 The Sierra Cossie might have been the first Ford to be honoured with the Cosworth name, but the relationship between the two companies dates back to the 1960s when the American car producer funded the development of a 3-litre V8 engine for Lotus’s F1 car. The resulting V8, known as the DFV, then went on to be a dominant engine in Formula 1 for over a decade, winning 155 Grand Prix races.

Cosworth also developed a four-cylinder engine for Ford’s racing and rallying saloons in the late ‘60s and ‘70s. The Mk1 Escort RS1600, that replaced the Lotus-powered Twin Cam Escort, had a 1600cc engine with a 16-valve head designed by Cosworth called the BDA. 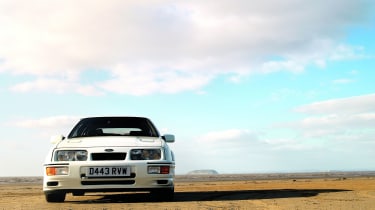 The formula for the Sierra wasn’t dissimilar to that of the earlier homologation Escorts, Cosworth created a new head for one of Ford’s existing engine blocks to make it significantly more powerful.

The cast iron block from Ford’s single-overhead cam, the T88 Pinto that was used in the Escort RS2000, formed the basis of the Sierra’s new engine, called the YB. Cosworth designed an aluminium head to suit the Pinto block with two belt-driven cams operating 16 valves; eight 35mm diameter inlet valves and eight 31mm exhaust. Then, because it was the 80s and it was very much in fashion at the time, the Cosworth engineers added a turbocharger, a Garrett AiResearch T3, and an intercooler that boosted power to 201bhp at 6000rpm and 205lb ft at 4500rpm. That was in road form, when in race trim the first engines produced around 375bhp and that number quickly grew.

Coupled with a five-speed Borg-Warner gearbox the Cosworth YB engine sent torque to a rear axle fitted with a viscous-coupling limited-slip differential. With 204bhp the Sierra could accelerate from 0-62mph in 6.2sec and hit an official top speed of 150mph. 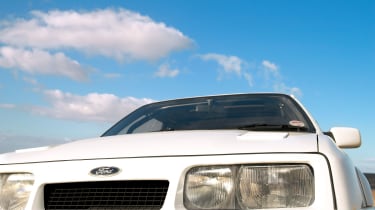 The Cosworth’s basic chassis is still much the same as a regular Sierra’s, with MacPherson strut front axle and semi-trailing arm rear set up. However, it was tweaked and tuned with different spring rates, dampers and anti-roll bars by Ford's Special Vehicle Engineering division to suit the car’s new purpose, plus a quicker steering rack with 2.6 turns lock-to-lock was added.

Despite the similar layout, no one would mistake the RS Cosworth from an ordinary Sierra thanks to the huge rear wing extending from the rear pillars and propped up by one column balanced on the boot. According to Ford, the wing was functional and could produce up to 20.4kg of downforce at 70mph. 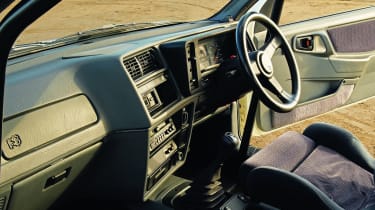 The first Sierra Cosworths used the model’s simple and light three-door shell, with one large rear-quarter window rather than the dual side window shell used by the Sierra XR4i. As well as the rear wing, there are wider arches to house the 7-inch wheels, a front air dam to help reduce lift and deep side sills.

All cars came with a tilting glass roof and were painted either black, white or moonstone blue. Inside, the Cossie was built to Sierra Ghia levels of equipment, except for the addition of Recaro front seats and a sportier three-spoke steering wheel.

Only the basic Seirra’s security system, if you could call it that, we’re used on the Cosworth and that meant it wasn’t difficult for even an incompetent thief to break into one and make off with it. Combine its vastly inflated price tag, the desirable parts attached to it and its huge performance, and Cossies were often the target of thefts. In the ‘90s, when car crime and joy riding was at a record high, insurance premiums on fast Fords were monumental. 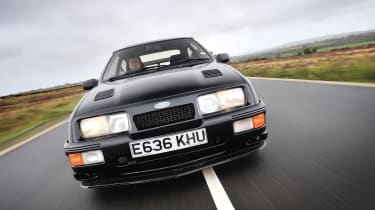 In 1987, when the Cossie first hit the race track, it started to win almost instantly. By June of that year it had taken victory at the first two rounds of the Monroe British Championship, the Willhire 24 Hour race at Snetterton and the Nürburgring 24 hours.

Despite being designed as a circuit racer, Ford used the RS Cosworth in rallying too. It wasn’t a runaway success, its rear-wheel drive layout was dated and unsuitable against the four-wheel drive competition, but it managed one World Rally Championship event win and a third in the 1986 Manx Rally against the wild Group B cars.

By 1987 Ford wanted to improve the RS Cosworth to keep it competitive, not that it was really struggling. The rules allowed special modifications to be made to the race cars if 500 road-going evolution models were built. Ford identified what was needed to make the Cosworth more powerful, faster and more stable and created the Sierra RS500 Cosworth. The limited-run car’s body was slightly altered with a 30mm gurney flap on the rear wing, an additional spoiler on the trailing edge of the boot and a bumper with more air vents and a lower lip. The engine was modified too, with a bigger turbo and a revised inlet manifold to increase peak power to 224bhp. 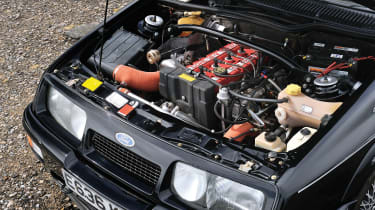 As well as the dormant second injectors, the RS500 had tabs on its rear subframe to suggest a new place to locate the trailing arms. They we’re in fact superfluous, too flimsy to mount any suspension components on and just allowed race teams the to alter the car’s rear suspension geometry.

The RS500s weren’t built by Ford. Instead it farmed the work out to Tickford, which took delivery of 500 complete, ordinary Cosworths and set about converting them to the higher specification, including replacing entire engines. All of the RS500s were supposed to be black, but due to the last-minute way the RS500 project ran, only 392 were black, 52 were blue and the remaining 56 were white. 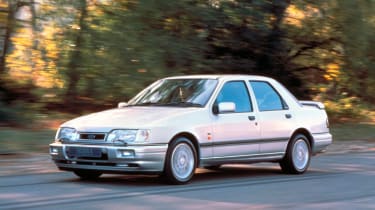 The Cossie story doesn’t end at the RS500, though. In 1988 a more civilised version was built using the four-door Sapphire bodyshell, first with the same rear-wheel drive layout as the three-door original, and then later with four-wheel drive. But even with a more restrained exterior, a plush velour interior and an executive four-door shell, the Sapphire was far from dull. The early rear-wheel drive cars with 204bhp could hit 60mph in 6.1sec.

In 1990 the biggest change to the Cosworth’s drivetrain was made, Ford changed up to 80 per cent of the engine parts increasing the power to 220bhp, replaced the brakes and added a four-wheel drive system that spilt torque 34:66 front and rear. The new drivetrain used a similar layout for the rear axle as the first Cosworths, even the viscous-coupling LSD remained, but the gearbox was all new. With integral centre diff, again with a viscous coupling to limit slip, and a chain driven take-off for the front propshaft, the new gearbox sent drive to the front down the right-hand side of the engine to an offset front differential. Despite the extra power and potential for greater traction, the 4x4 Sapphire was slower to 60mph reaching the speed in 6.6sec.

The four-door, four-wheel drive Sapphire, with its tougher stiffer shell than the original three-door (thanks to a bulkhead behind the rear seats), was ripe to be turned into a rally car by Ford. It didn’t rule the rally stages like the RS500 did the circuits, but with three podium finishes in 1990 and two podiums in 1991 it showed promise. As a result, the 4x4 Sapphire also formed the basis of Ford’s more successful rally car, the Escort RS Cosworth. 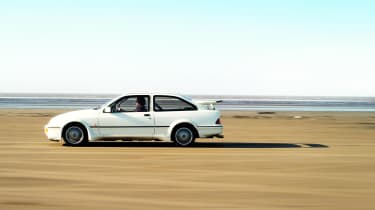 It isn’t the kind of set-up Ford would sign-off today. You feel the chassis’ nervous energy through the steering, which also has a tendency to tramline and wriggle over transient camber changes. And there’s a degree of pitching that can unsettle the otherwise pliant ride on more punishing humps and dips. But there are reciprocal benefits to this comparatively hair-trigger character – not least the crisp turn-in and the way understeer can be kept at bay with the right foot.

Much of today’s saloon and hatch-based performance hardware feels numb and over polished by comparison. Not to mention bigger, wider and heavier. With steering that doesn’t seem to resolve half as much information from the road’s surface. Or respond as precisely or swiftly to small, line-trimming inputs. Levels of grip have escalated but too little of today’s machinery keys into the road the way the Cossie does. It isn’t particularly relaxing but it is undeniably absorbing. 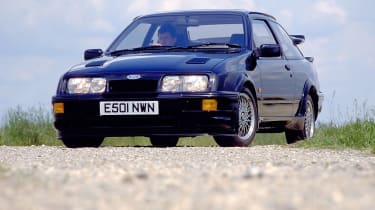 Dynamically, the RS500 is old-school: modest grip levels, but plenty of feel and transparent handling traits. The steering is power-assisted, but there’s decent weight to it and the rate of response strikes a sweet balance between agility and stability. You always know exactly how much grip the front end has to lean on, which allows you to carry plenty of speed on turn-in. Once loaded with lateral G, the chassis remains neutral through both fast and slow corners, only oversteering with deliberate provocation.

As you’d hope, though, the Sierra loves to slide. There’s plenty of steering lock to play with, which is just as well, for the transition from grip to slip can be swift on wet roads. Balancing the slide requires delicate throttle work, as you need to tread a fine line between maintaining the boost and asking for too much. Likewise, if your right foot’s too timid, the boost will fade and with it the oversteer. It’s a particular challenge but one with rewards, as the Cossie is enormously entertaining when mastered. 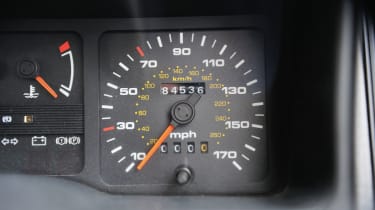 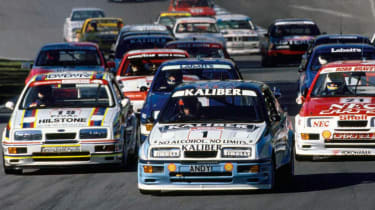