With a modern 2-litre Zetec engine and numerous chassis upgrades, this Mk1 Cortina really is a blast from the past 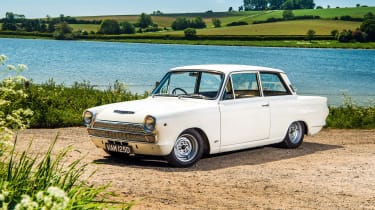 This is not a restomod, a backdated modern or an icon reimagined. Nor is it a regular Mk1 Cortina that’s been restored to within an inch of its life and is now claiming to be an example of its more famous Norfolk-educated brother in order to massage its provenance and improve its result at auction. No, this is a run-of-the-mill 1960s Ford Cortina that’s been rebuilt with what feels like the evo reader very much in mind.

Engineered by Retro Ford, this demo car showcases the Corby-based firm’s complete 2-litre Zetec conversion kit. Replacing the original Kent engine, in basic tune it produces in the region of 170bhp, which is around 100bhp more than the car would have as standard, and it costs £4351. Included in the price is a new Zetec engine and everything required to convert it for use in a longitudinal configuration with rear-wheel drive, rather than the transverse front-wheel-drive layout for which it was designed. So there’s a new sump, water pump, engine mounts, flywheel and clutch assembly, exhaust manifold, starter motor, ignition system, some outrageous individual throttle bodies and an ECU to control it all. Retro Ford also recommends you use a more substantial gearbox, which means you’ll need a further £300 to buy a ’box from a dead MX-5 and an additional £1075 for the fitting kit. An upgraded, larger-capacity aluminium radiator is also available for £294.

A substantial increase in power and performance on a car launched in 1962 is also going to mean considerable work to the chassis and brakes is required. In this instance Retro Ford has fitted a pair of coilovers at the front, anti-roll and anti-tramp bars, a bias brake pedal box and ventilated front discs. There is also the option of 5-, 6- or 7-inch-wide steel wheels equipped with rubber in a more modern spec. This example has also had the standard worm-and-wheel steering box replaced with the company’s rack-and-pinion conversion. It costs £1268, but does offer both a wider choice of steering ratios and has been engineered to minimise bump steer if you also decide to lower the car, which most customers are prone to doing.

> Lotus's badge-engineered specials: from Cortina to Carlton and VX220

If this has you craving a piece of Ford iconology with a 21st century focus, there is a downside: Retro Ford doesn’t build, let alone sell, complete converted cars, which means you either need to have a Mk1 Cortina at your disposal or be prepared to source one. The cheapest example we found in the classifieds was listed at £7700, with the majority well into five figures. And, of course, you’ll need to be handy with the spanners in order to build your Zetec-engined Cortina…

This particular car has had a few more modifications made to its Zetec engine, too. There are more aggressive cams and lighter pistons allowing it to rev higher, which has resulted in a claimed power output of 255bhp (on par with a Caterham Seven CSR). It’s also finished to a drag-racing specification, in that it only has one seat and very little else inside in a bid to keep weight to a minimum – it tips the scales at comfortably under the standard car’s 787kg – while the differential is a permanently locked item (a spool diff). Together these help this Cortina cover the quarter-mile in 11.9sec – just 0.1sec slower than we’ve recorded in a 542bhp Porsche Panamera Turbo (evo 237).

A 255bhp 2-litre Zetec is more engine than a Mk1 Cortina needs: the smallest of throttle openings at low revs sparks rampant acceleration. But, crucially, it isn’t more engine than the car can cope with. Its acceleration may be immediate and savage but there’s not a hint of fragility about the car. In fact it encourages you to grab it by the scruff and take advantage of its slick-shifting ’box and new-found performance. 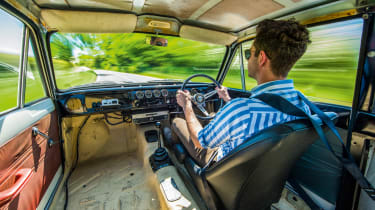 But more so than its performance it’s the soundtrack that draws you in: the air rushing through the 48mm-choke throttle bodies, the gurgle under load at low revs, the rasp from the exhaust and the deep bark as the throttles open wider and the crank heads for 7000rpm. It’s a magnificent sound, totally unapologetic about the decibels being generated and the greatest antidote to today’s anodyne turbocharged motors.

Despite its thoroughly modern performance, there’s no getting away from the Cortina’s 55-year-old underpinnings. There’s no shortage of turn-in grip and the upgraded brakes resolutely deliver, but once you’re into a corner you feel the front and rear axles reacting at different rates – a symptom of the car having independent front suspension and a live rear axle. Yet because there’s enough grip and control the sensation isn’t as off-putting as it sounds, just a pleasant reminder that this is a car from a period when cross-ply tyres were considered the norm. 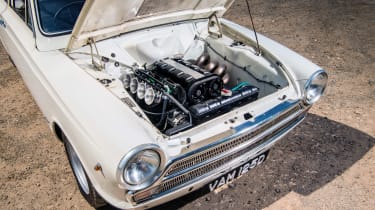 As you exit a corner there’s more squat across the rear axle than you’d get from any modern car, and it doesn’t take much additional throttle to overcome traction, but there’s enough clarity of feedback from the steering – nicely weighted, if heavy at low speeds – and your backside to allow you to drive right up to the edge of grip. It’s an uncorrupted approach to the thrill of driving. Within a few miles you sense you know everything about how the car is going to react and why. By the end of a day behind its wheel you’re making a mental note to add ‘Mk1 Cortina’ to your classifieds watch list.

A conversion such as this is a very personal project, from the exact mechanical specification you go for down to how you present the car – either as a drag car such as this, or a sleeper still dressed as a 1200 Deluxe but built to scare the wits out of unsuspecting Audi RS3 drivers. But no matter what your inspiration and the finished result, it remains a hugely desirable way to experience a degree of old-school Ford thrills with a thoroughly modern performance twist.