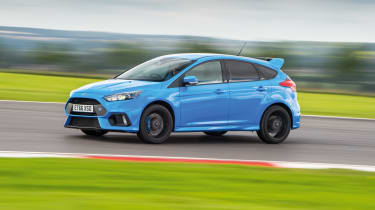 Numerous cases of engine problems suffered by the Ford Focus RS have forced Ford to extend free inspections and repairs to all owners affected, regardless of mileage or warranty status. Ford is currently contacting UK and European owners thought to be affected.

The mechanical malfunction of the 2.3-litre EcoBoost unit is linked to the head gasket, which fails to seal the engine block to the head correctly. Long term heat exposure warps the block preventing the head gasket from forming a watertight seal between the two engine components. As a result, coolant seeps into the cylinder block, producing the white smoke upon combustion and causing misfires when the engine is cold.

To rectify the problem, Ford dealers are checking the cooling system and replacing the head gasket for a new unit. If it’s needed, Ford will also fit a new cylinder block, too. Ford has confirmed the work will be carried out free of charge.

The Ford Mustang uses a detuned version of the same 2.3-litre EcoBoost engine, but different internals have safeguarded it from the problem.