The next generation Ford Focus ST has been announced, promising 250bhp from a 2.0-litre EcoBoost. 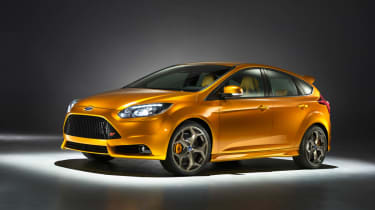 Ford is flexing its performance muscles, unveiling its new 250bhp Focus ST hot hatch before the car makes its official debut at the Paris Motorshow in two weeks time.

As the range-topping model, the ST uses a 2.0-litre, four-cylinder ‘EcoBoost’ engine that Form claims will provide ‘an intoxicating cocktail of exhilarating performance and handling.’ Judgement on this will have to wait until we’ve driven it, but the 28bhp increase from the current model should help things in the right direction.

The current Focus ST manages 0-60mph in 6.7sec and will go on to 150mph, so if Ford can keep the weight in check and duck under the 6.5sec mark it will have the firepower to rival the Renaultsport Megane 250, Alfa Romeo Giulietta Cloverleaf and VW Golf GTI to name a few possible rivals.

What remains to be seen is if the EcoBoost unit has the charisma of the 2.5-litre 5cyl unit that underpins both the current ST and RS but is now being killed off by emissions regulations.

Opinion on the external appearance was mixed in the office. It’s certainly aggressive, with a gaping front intake and reptilian headlights, but handsome? The interior shots meanwhile suggest inspiration from George Clooney-era Batman suits. Taking a leaf out of Chrysler’s 1970’s book, the arresting hue shown in the photos here is called ‘Tangerine Scream’.

The Focus range is a vital one for Ford and has been developed under what the company calls its ONE Ford strategy. Behind the corporate buzzwords lies the intensive fitness campaigns undertaken by the American car giants to increase profitability. The result is that the Focus, wherever it’s built, now shares around 80 per cent of its components with its global siblings. The lesser Focus models will be available from early 2011, but the ST itself won’t arrive until 2012.