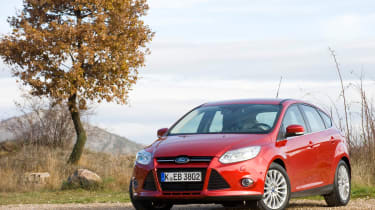 When you arrive at a launch event there is often a slightly unseemly scramble as journalists jostle their way to the keys for the most photogenic cars and then, fobs secured, get the hell away from the car park as quickly as possible before anyone can say otherwise. A full 15 minutes after I climbed into the new Focus, however, I still haven’t moved an inch. Someone actually wanders over to see if I know where the handbrake is.

The reason I’m not going anywhere is the  sheaf of papers I found on the driver’s seat, detailing all the optional automated systems on the new Focus and how to use them. I’m sure I’ve driven a Mercedes S-class with fewer gadgets. This Ford’s steering wheel has more buttons than the Ferrari 458’s. Our heavily specced test car is equipped with, amongst other things, Lane Departure Warning and Lane Keeping Aid systems, a Low Speed Safety System (helps you to avoid crashing in town), Traffic Sign Recognition (displays the last speed limit sign you passed), Driver Alert (works out how ‘with it’ you are and whether you should stop for some caffeine), Blind Spot Information, Adaptive Cruise Control, Auto High Beam headlights, Stop-Start and Active Park Assist (which will identify a big enough kerbside parking space as you drive past and then steer you into it).

The systems that I do manage to fathom, like sign recognition, work well, but it would take days to get to grips with them all, and obviously of more interest to us is how the Focus drives on a decent bit of road, such as the Col de Vence.

It is a physically much bigger car now and not a terribly dynamic- or good-looking one, if I’m honest, with all sorts of lines clashing, particularly at the rear. The cooking 1.6-litre petrol EcoBoost engine puts out very impressive numbers, however, with 179bhp at 5700rpm and 177lb ft from 1600 to 5000rpm, or 199lb ft on overboost between 1900 and 4000rpm. It’s a smooth and punchy unit that is so responsive you really wouldn’t know it’s turbocharged. It even sounds quite good.

The six-speed manual gearbox is slick and accurate, the seating position hugely adjustable and the seats themselves supportive. But anyone hoping for the sort of incisive drivers’ car that the mk1 Focus was will be disappointed, as this has a much softer feeling with the emphasis on ride rather than turn-in. There isn’t even a button to turn the ESP off, although it is so nicely judged that this isn’t a great loss.

The steering is very light, but it’s also accurate so you can always feel how hard you’re working the front tyres, and there is a really nice balance to the chassis so, although you won’t find any wild lift-off oversteer, you can adjust the car subtly in a way that makes it very easy and rewarding to flow through corners.

You can tell that the ride and handling team at Ford hasn’t lost any of its skill. The Focus is genuinely enjoyable on the road up the Col, it’s just that it has been set up to reflect a large car with more gadgets than Suzi Perry. Let’s hope the same people use their skill to set up the new Focus ST to reflect a true hot hatch.