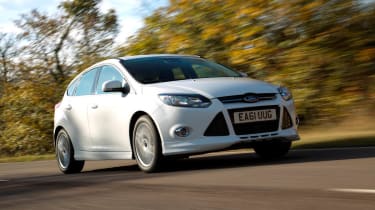 Ford’s range-topping diesel Focus, and the second most powerful model in the range – this side of the forthcoming ST. It uses a 161bhp version of Ford’s familiar 2-litre TDCI direct-injection diesel engine and costs £21,345 in the most dynamic Zetec-S form we’re testing here.

The diesel engine is basically in the same spec as when fitted to the considerably porkier Mondeo and S-Max, so it’s no surprise that it manages to raise the lighter Focus into warm hatchback levels of performance. The official claim is an 8.6-sec 0-62mph time and a 135mph top speed, together with a 56.5mpg combined economy figure.

The engine itself puts in a credible performance, with good low-down responses and a broad powerband that extends from around 1500rpm all the way to the 4000rpm at which peak power is delivered. Not that you’re likely to work it too hard in everyday use thanks to the combination of a fat torque curve and some fairly industrial noises if you venture too far around the rev counter.

As with the petrol version, the TDCI Zetec S suffers from slightly empty-feeling electric power steering. You get used to it over time, but it still takes the edge off the driving experience. The diesel engine also feels heavier than the petrol powerplant, pulling the nose wide when asked to take tighter corners quickly.

The optional safety kit is well worth avoiding, though - the lane departure and blind spot systems suffer from lots of false positives and the automatic high beam is almost comically inept at working out when to dip the lights.

It’s slightly slower – but considerably cheaper – than the Golf GTD, although it can’t match the Volkswagen on desirability. It also undercuts the similarly powered Vauxhall Astra 2.0 CDTi SRI by over £1000.

Ford is likely to offer a diesel version of the Focus ST, possibly using a tuned version of this engine (which comes with up to 198bhp in the Mondeo.) We managed 45mpg in rapid, real-world driving.