One of the three famous GT40s which swept the board at the 1966 Le Mans 24 Hours is up for auction. 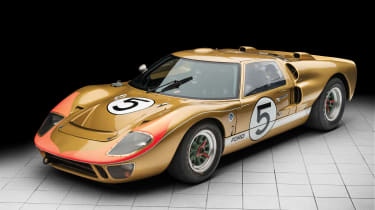 There’s every chance the no. 5 car, which has been restored to original race specification, will fetch its lofty estimate, if not break it. Each year the Monterey sale, which is held in conjunction with the Pebble Beach Concours d'Elegance, nets record-breaking auction results, featuring some of the most exclusive and pristine examples of cars in existence.

Run by the Holman and Moody race team at the 1966 Le Mans 24 Hours, chassis number P/1016 was driven to third place by Ronnie Bucknum and Dick Hutcherson. It was part of the famed GT40 trio that locked out the podium that year – a feat which broke arch-rival Ferrari’s stranglehold on Le Mans honours – and awarded Henry Ford II bragging rights over Enzo Ferrari in the process.

Sitting beneath the 40-inch-high roofline, behind the rear bulkhead, is the race-honed, naturally aspirated 7-litre V8 – measuring over twice the size of the Ferrari 330 P3’s V12 –  which develops 485bhp and 475lb ft of torque.

After its Le Mans success, the gold-liveried GT40 competed a further three times in 1967 before time was called on its racing career. Since then, it’s featured in various car collections and claimed accolades on the concours circuit: in 2003 it was named ‘People’s Choice’ at Pebble Beach.

Speaking on the GT40, Alexander Weaver, car specialist at RM Sotheby’s, said: ‘This Ford has been restored to the condition it raced in, which will be a vital consideration for any prospective buyer. Few cars can be considered gold standard, but this GT40 is, and will always be remembered as one of the Fords that finally beat Ferrari.’

The car will go under the hammer in California on August 24.