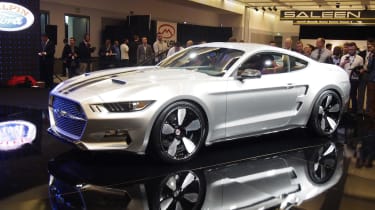 If you’re going to apply your name to a car, you’d better hope it’s going to be successful. John Z. DeLorean found out the hard way, and Henrik Fisker has too, following his resignation from and the eventual collapse of electric vehicle firm Fisker Automotive.

First shown as a design sketch, the Galpin Fisker Rocket is based on the latest-generation 2015 Ford Mustang. Galpin has previous experience with Ford vehicles – notably the Ford GT-based Galpin GTR1 – but the car’s lines mix classic Mustang with some of the high-tech styling cues found on the the range-extended Fisker Karma.

There are some distinct differences over the regular Mustang, however. At the front a large grille dominates, bisected by a polished aluminium bar. Additional vents in the bonnet and front bumper join large twin vents ahead of the rear wheels, with large front and rear splitters helping generate downforce.

Those alterations are necessary to cope with both the cooling and performance of the supercharged 5.0-litre V8 under the bonnet - producing all of 725bhp. Distinctive 21in alloy wheels wrapped in Pirelli P-Zero tyres should keep the Rocket attached to asphalt, and Brembo brakes work valiantly to rein it down from high speeds.

Prices haven't yet been announced - nor has availability in Europe - but the company does promise the car will be available around the world, as well as from Galpin's base in California. Deliveries begin early 2015.