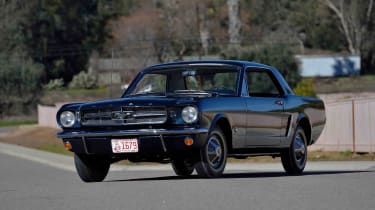 Fans of American metal will want to keep their eyes on the upcoming Mecum Auctions Indy 2017 sale in Indianapolis this May.

There’s an example of just about every classic American car you can think of crossing the block at Indy - but perhaps the most special is lot R403: the first ever Ford Mustang hardtop.

As far as people are aware, anyway - Ford doesn’t always assign consecutive VIN plates to its cars and there’s a possibility this car wasn’t the first hardtop actually built. But wearing number 5F07U100002, it’s certainly the second ever Mustang to be assigned a VIN, following a convertible variant that currently resides in The Henry Ford Museum.

Car 00002 isn’t the most desirable specification in Mustang terms, but that hardly matters given the context. Up front sits a 170 cubic-inch (2.8-litre) inline six-cylinder engine, attached to a three-speed manual transmission. It also rolls along on unfashionably small (but original) 13-inch wheels, and is “blue on blue”, with a coat of Caspian Blue paintwork and a blue crinkle vinyl interior. 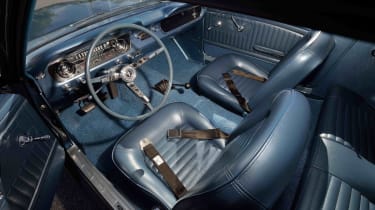 That engine came straight from the Ford Falcon of the era, and made a modest 105bhp at just 4400rpm. Still, it had less than 1200kg to push along and more powerful units weren’t too far away with the first V8s appearing in 1965.

The “first” car is technically a pre-production model, its history unearthed during a restoration by its most recent owner that revealed prototype sheet metal stampings and different welds. Research by the owner, Bob Fria, also discovered its original destiny as a launch car for the Canadian market - a launch it failed to make, when the car was sent to a dealership in the remote Yukon territory by mistake.

> Read our full review of the Ford Mustang here

Fria restored the car over two years after he bought it in 1997 - following 13 previous owners - returning it to its original specification. No estimate is quoted - but it’s safe to assume a car with such early provenance won’t be cheap.

Joining it in Indianapolis are dozens of other American classics. Particular highlights for us include lots R114 and R115, the first and the last 1978 Chevrolet Corvette Pace Car Editions, and several anniversary Corvettes, including 1978 Silver Anniversary, 1988 35th, 1993 40th, 2003 50th and 2013 60th anniversary models. All are being sold without reserve. 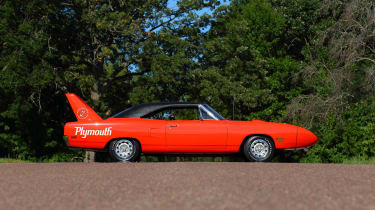 Further through the listings there’s a 1970 Plymouth Superbird in iconic Tor Red paintwork, and a 1987 Buick GNX that’s somehow covered only 42 miles from new. The 1976 Pontiac Trans Am SE - a celebration of Pontiac’s 50th anniversary - is appealing too and had just one owner prior to 2014, while rather more colourful is a 1970 Dodge Charger R/T, fully restored in 2016 and painted in Hemi Orange.

There’s a small selection of vehicles from the rest of the world too, though two stand out to our eyes. The first is a 1979 Ferrari 308 GTS that couldn’t look more like a product of the 1970s if it tried, with bronze paintwork and gold wheels. The other is a 2004 Acura NSX-T, with under 9000 miles and as the “T” suggests, a removable Targa roof.