Ford has brought back the Mach 1 to the Mustang range after 17 years, and it’s officially coming to the UK 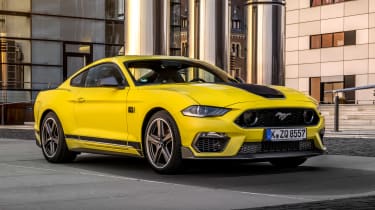 Following its reveal in June, Ford has announced that the new Mustang Mach 1 will hit the UK market in 2021. The Mach 1 combines a powertrain derived from that of the GT with a range of chassis and cooling updates from the Shelby models, plus some bespoke styling elements. No pricing has been announced, however first cars are likely to hit our roads in spring.

As mentioned above, the Mach 1 is powered by the same 5-litre ‘Coyote’ V8 engine as the GT, but features a range of ancillary updates which raise power from the standard GT’s 444bhp to 454bhp at a lofty 7500rpm; torque is also lifted to 390lb ft at 4600rpm. This extra performance has been liberated thanks to a re-booted ECU in conjunction with the intake manifold, engine oil cooler and upgraded cooling lines from the Shelby GT350.

Both six-speed manual and ten-speed automatic transmissions are available, the former with a shorter throw, transmission oil cooler and auto-blip function. The auto has also been updated with a bespoke calibration. The Mustang’s electric power steering system has also been retuned, so too the standard-fit MagneRide adaptive dampers. Ford’s also applied stiffer rear-axle bushings from the GT500, plus stiffer anti-roll bars on both axles. 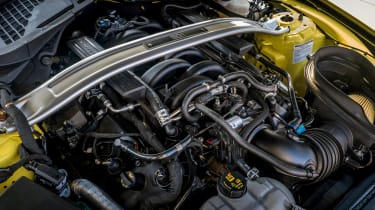 The interior also picks up some bespoke design elements, including a new trim accent on the dash, and the accessory dials found on the GT350 and GT500.

UK pricing details for the Mach 1 haven’t been disclosed, however order books are set to open in early 2021, with first cars hitting our roads in spring.