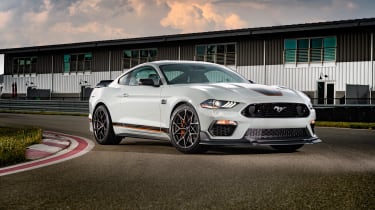 Ford has revealed the new Mustang Mach 1, a new performance version of America’s bestselling pony car to fill the gap between the GT and Shelby GT350. The Mach 1 combines a powertrain derived from that of the GT with a range of chassis and cooling updates from the Shelby models, plus some bespoke styling elements. Unfortunately, the Mach 1 isn’t likely to reach the UK.

As mentioned above, the Mach 1 is powered by the same 5-litre ‘Coyote’ V8 engine as the GT, but features a range of ancillary updates which raise power from the standard GT’s 444bhp to 480bhp at a lofty 7000rpm; torque is also up 27lb ft to 420lb ft at 4500rpm. This extra performance has been liberated thanks to a re-booted ECU in conjunction with the intake manifold, engine oil cooler and upgraded cooling lines from the Shelby GT350. 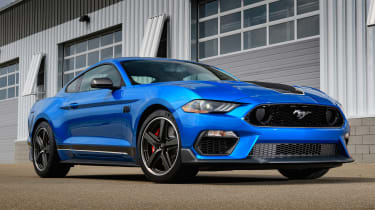 Both six-speed manual and ten-speed automatic transmissions are available, the former with a shorter throw, transmission oil cooler and auto-blip function. The auto has also been updated with a bespoke calibration. The Mustang’s electric power steering system has also been retuned, so too the standard-fit MagneRide adaptive dampers. Ford’s also applied stiffer rear-axle bushings from the GT500, plus stiffer anti-roll bars on both axles. 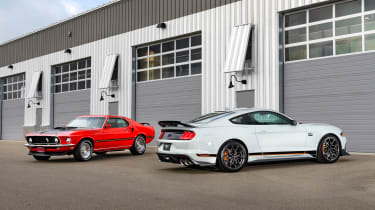 The interior also picks up some bespoke design elements, including a new trim accent on the dash, and the accessory dials found on the GT350 and GT500.

The Mach 1 will reach American showrooms in spring 2021, but is unlikely to be added to international markets, including the UK. While the GT350 and GT500’s absence in the UK is driven by their lack of emissions compliance with the EU’s far more stringent regulations, the Mach 1’s GT-based V8 doesn’t completely remove the possibility of it coming to the UK, but it’s very likely to be that the only Mustang Mach we’ll see in the UK any time soon will have the letter ‘e’ attached to the end of it.