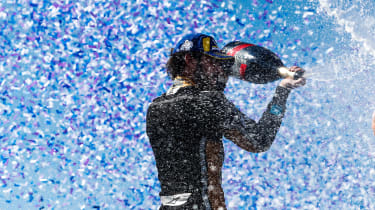 The French driver clinched just enough points in the penultimate round to put himself out of reach of Sam Bird, after both drivers had started towards the back of the grid after troubles in qualifying. 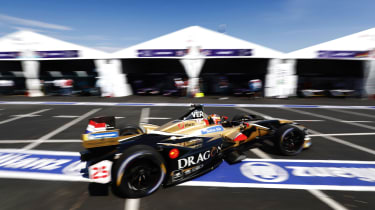 The race was eventually won by Lucas di Grassi in the Audi Sport ABT Schaeffler car following a close battle with teammate Daniel Abt - one whose risky moves caused plenty of grief for team principal Allan McNish, eventually ordering the pair to hold station.

Vergne, di Grassi and Abt continued their strong pace on the second day of racing around the Brooklyn circuit, finishing in that order, but the Audi team’s strong results overall awarded it the team’s title by just two points ahead of Vergne’s Techeetah squad.

Thunderstorms in practice cleared for the race, with Vergne leaping from third on the grid into the lead by the first corner, eventually leading from lights to flag. Title rival Bird was not so lucky, finishing tenth - and handing a potential second place in the championship to di Grassi. Renault e.Dams racer and season two champion Sebastien Buemi finished fourth in the standings, having not won a single race this season.

Formula E now takes a long summer (and autumn) break before season five kicks off on December 15 in Ad Diriyah, Saudi Arabia. The 2018-19 season will then move to Morocco, Mexico, Hong Kong, China, Italy, France, Monaco, Germany, Switzerland and the US, but the biggest news for season five is the all-new gen-2 car.

More dramatically-styled, more powerful and longer-lasting than before, the new cars will allow drivers to complete a full race distance on a single charge, removing the need to swap cars mid-race.

The new cars can reach 60mph in 2.8sec and go on to 174mph - a couple of tenths quicker to accelerate and significantly faster at the top end than the existing cars, yet the extra battery capacity hasn’t significantly affected the car’s weight.

Formula E has always had close racing, but with more performance and fewer gimmicks, it’ll certainly be a one to watch when the next season begins in December.