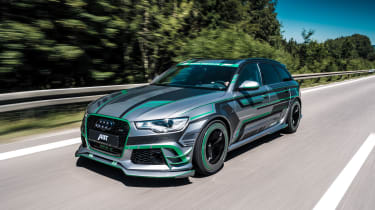 Abt Sportsline has created the world’s first Audi RS6 hybrid, and it boasts hypercar-rivalling performance. Abt e-Line, the German tuning house’s electric-power division, developed the RS6-E from an Abt-tuned RS6, with the final results seeing it punch through the 1000bhp barrier.

The car’s hybrid powertrain, which teams an electric motor and an upgraded version of the standard car’s twin-turbocharged 4-litre V8, kicks out combined totals of 1004bhp and 952lb ft of torque – some 407bhp and 399lb ft more than Audi’s own RS6 Performance. Top speed is quoted as being 199mph, while 0-62mph is dispatched in 3.3 seconds.

To reach those heady outputs, Abt first applied its Power R upgrade package to an RS6 Performance. This lifts power and torque to 720bhp and 678lb ft respectively – up from 597bhp and 553lb ft – by means of a remap and an Akrapovic exhaust system. Next the electric motor was integrated into the drivetrain, adding a further 284bhp and 274lb of torque directly to the rear axle.

To deploy the extra performance the driver must press two buttons mounted on the steering wheel – one to prime the system and another to activate it. The electric boost is available in ten-second bursts at speeds in excess of 62mph. Supplying the motor is a battery pack housed in the boot. It’s rated at 13.6kWh, which translates to around 20 bursts before the battery is drained.

All the hybrid technology adds about 200kg to the standard car’s nigh-on two-ton kerb weight, although it’s clearly a trade-off that yields mind-boggling performance, as you can see in the video below, which features Formula E driver Daniel Abt.

Away from the powertrain-based modifications, Abt has fitted H&R springs to lower the car’s ride height. And keen for the RS6-E to grab as much attention as possible, the standard car’s inconspicuous exterior has been abandoned by wrapping it with a circuit-board inspired pattern, grafting on an aggressive, aerodynamic bodykit and fitting three-tone 21-inch Abt Sport GR alloys.