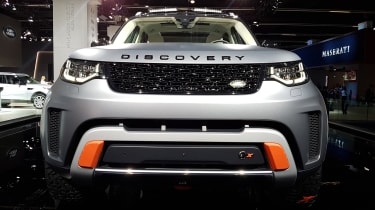 Land Rover has unveiled a new take on its fifth-generation Discovery at the Frankfurt motor show, the SVX, an extreme all-terrain model developed by Jaguar Land Rover’s Special Vehicle Operations. It’s powered by a supercharged V8 that develops 518bhp and 461lb ft of torque and features a host of enhancements designed to endow the SVX with the ability to tackle the toughest of terrains.

As well as the supercharged V8 Land Rover has updated the Discovery’s underpinnings and updated its looks with a number of bespoke SVX additions. To transform the Discovery from a machine that’s primarily aimed at on-road performance to one that can cope with the toughest off-road situations SVO has concentrated mainly on the SVX’s suspension and a model-first for the Discovery is Hydraulic Active Roll Control which endows the SVX with increased wheel articulation and reduces body roll.

Additionally the SVX has improved approach and departure angles thanks to a raised monocoque and air suspension all round with long-travel dampers. 20-inch forged rims are fitted with 275/55 R20 Goodyear Wrangler tyres with an 815mm rolling radius for improved grip while the SVX also has an active centre and electronic rear locking differentials along with traction control for maximise grip. The SVX also features recalibrated software for the eight-speed auto ‘box and its raft of electronic dynamic assistance systems. 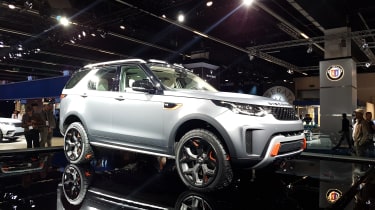 To go with its new-found extreme terrain ability the SVX also sports a series of interior and exterior upgrades to differentiate it from your common or garden Discovery. Externally there are unique front and rear bumpers with skid plates and there are plethora of ‘Rush Orange’ details such as the recovery eyes (each rated to over six tonnes), the lower rear bumper, accents on the wheels and around the front wing side vents with V8 branding.

To complete the look there’s an exclusive exterior hue – satin Tectonic grey – as well as an anti-glare bonnet finish and a Narvik black grille, black roof rails and a roof-mounted twin light pod for improved low-light visibility. Inside there’s a unique colour and material combination of ‘Lunar and Light Oyster’ with Rush Orange accents and X logo perforations on the SVX-badged seats.