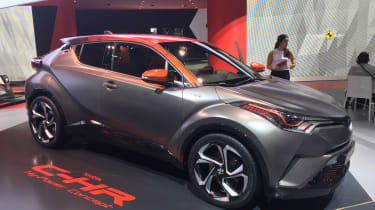 Hot crossovers are, for better or worse, becoming increasingly popular as the small SUV and crossover segments themselves enjoy rapid expansion.

With a Cupra version of the Ateca likely and Skoda similarly considering a Kodiaq vRS, Toyota is also dipping its toe into the water with the C-HR Hy-Power Concept, revealed at the 2017 Frankfurt motor show.

At a glance, not much separates the Hy-Power from a standard C-HR – you get the same funky styling (an acquired taste, but a chunk more interesting than most in the class) embellished with a Dark Carbon silver paint finish, dark chrome trim, 20-inch alloy wheels and a "burning orange" colourway on certain components as a contrast – most notably the flame-like diamond patterned roof.

Equally, there are only small variations inside from standard, mostly focused around a similar black, grey and burning orange colour palette. The seats are black diamond-patterned leather, while the stitching, panels in the seats and door cards and the dash highlight trim are all finished in orange. 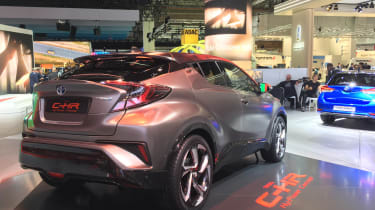 It's under the skin that bigger changes are promised, though frustratingly Toyota is being coy with the details. Where the standard car makes 120bhp from its 1.8-litre hybrid powertrain, the Hy-Power offers – as the name suggests – a boost in output and performance.

How much? Unfortunately that's for all of us to guess, but Toyota says it's part of a strategy that will see higher-performance hybrid models being offered in all its core products. That suggests a hotter hybrid Yaris could be on the way – perhaps taking inspiration from the GRMN – and maybe even a performance Prius – though with no existing hybrid GT86, one of those is less likely.

Toyota's full plans will apparently be revealed in early 2018, so we'll have to wait a few more months to see how much extra pep the Japanese firm plans to add to its hybrids.