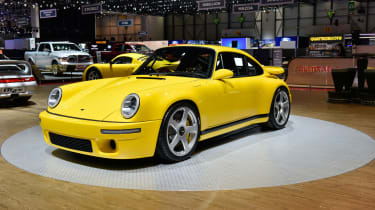 Never lacking in lusting onlookers at the Geneva motor show, the RUF stand hosted the reveal of the new Mezger engined CTR. It represents just another way to spend your money on 911 based machinery if current avenues aren't to your tastes.

Taking the basic form of a Porsche 964, you might be among the majority who’d dismiss it as just another 911 rendition - the truth is far from so. Under the familiar frock is a new, ground up design encasing some serious engineering.

The 700bhp CTR features innovative construction methods, utilising a carbonfibre monocoque chassis making it the first rear-wheel, rear-engined car to run this configuration. The carbon tub is bonded to a steel structure to create the upper passenger cell, and front and rear frames. 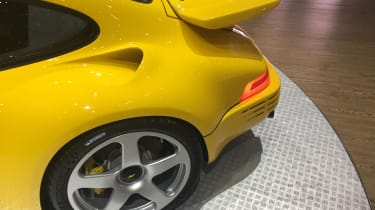 The 19-inch centre-lock wheels are suspended by double wishbones that operate push-rod actuated dampers to minimise unsprung weight. The front spring and damper pairing are fitted longitudinally in the car and are visible with the front compartment open, as opposed to the rear spring and damper combo which are mounted transversely at the fore of the engine bay

Extensive use of carbonfibre to construct all the body panels has allowed RUF to roll, bend and redesign the the five-generation old body to accommodate significantly more advanced hardware than was ever designed for the 964. As a result the it tips the scales at a low 1200kg. The doors are fitted with flush handles that pop out when you need to use them, like those on a Jaguar F-type.

The rear windows have also been angled in towards the centre of the car to create a vent to supply air to the engine, while Ruf’s signature air intakes over the rear wheels feed air to the intercooler.

Modern bucket seats, the visible carbon tub and acres of Alcantara dominate the interior, but the CTR’s retro look hasn’t been completely forgotten. A traditional Porsche five-dial instrument cluster is present and the seats have been covered in a yellow tartan fabric.

The 2017 CTR is powered by a water-cooled twin-turbocharged 3.6-litre flat six engine, based on Porsche’s Mezger powerplant found in some old 911 Turbos and its GT cars. After Ruf has performed its magic though, the Mezger in the CTR puts out 700bhp and 649lb ft of torque. That’s then sent through a Ruf developed 6-speed manual gearbox and limited slip differential. Unlike Ruf’s last supercar, the CTR3, Ruf has stayed true to its roots and the new car’s engine is located at the rear. 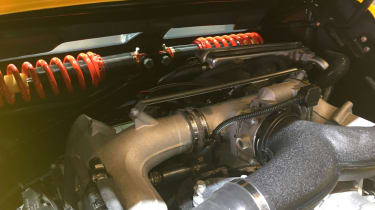 The result of such vast power and torque is a 0-62mph time under 3.5sec, then going on to hit 125mph in less than 9sec. Ruf says that the CTR will hit a top speed of 225mph. If you want to get your hands on one though, you’re going to need to move as quickly yourself. Ruf will only build 30 2017 CTRs and each will cost approximately €750,000 before taxes.

The 2017 CTR comes exactly 30 years after the original CTR, known as the Yellow Bird, was released. The original Yellow Bird has been seared onto the brain of many car enthusiast more many reasons, but probably most memorable was the video that the Yellow Bird starred in, Faszination. The 16 minute long film showed Ruf’s creation being manhandled around the Nordschleife by white socks and loafer-clad Stefan Roser.

More impressive than his footwear was his ability to control Ruf’s heavily turbocharged creation. Each corner is dispatched with an equal degree of aggression and delicacy, Roser attacks each turn in then balances the car with expert precision to gather up and slide right at the exit of each corner. Exterior shots show the inch-perfect slides with the Yellow Bird hitting each apex and exit as plumes of tyre smoke erupt from the rear tyres. It’s car control, show boating and Nurburgring knowleade at its absolute finest.

We only hope that a static display at the Geneva motor show isn’t the only promotion the new CTR gets. Our fingers are crossed for a Faszination 2...