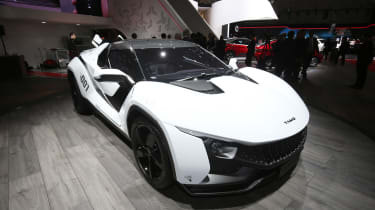 Tata Motors: Not a company you'd traditionally associate with sports cars, being best known for the Nano budget car designed to mobilise India, but in launching new brand Tamo and the Racemo sports car at the Geneva motor show, it has apparently broken with convention.

Tata has grand goals for Tamo and the Racemo, describing the car as India's first 'digitally native, connected, "phygital" experience, crafted in a two-seater sports coupe'.

Marketing buzzwords all (we're certainly not sure about "phygital") but the basic specification is appealing, once all the connectivity-related, future mobility mumbo-jumbo is stripped away: two seats, a unique modular platform, a mid-mounted turbocharged engine and rear-wheel drive.

It's pleasingly down-to-earth too, that turbocharged unit being a 1.2-litre, three-cylinder unit, albeit one capable of producing 187bhp at 6500rpm. 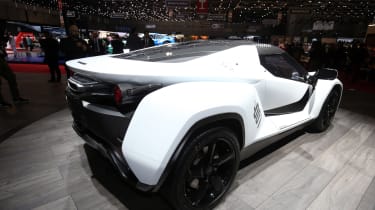 Torque is quoted at 155lb ft at 2500rpm, and the transmission is a six-speed automated manual with a paddle-shift - perhaps not the most sophisticated when others are using dual-clutch (or as interactive, when others still have kept with manual 'boxes) but one with the potential for fun. 0-60mph takes 'under six seconds'.

To this double-wishbone suspension is attached at both ends, and to those a staggered setup with 17-inch front and 18in rear wheels, wrapped in 205/50 R17 and 235/45 R18 tyres. Perhaps a surfeit of grip in a car with 187bhp, but it lends the Racemo a chunky appearance.

The rest of the styling is almost toy-like and the Racemo appears to ride quite high, but it's hard not to imagine this is deliberate given the car's intended market. The interior, in contrast, looks pared-back, save for a trio of information screens in front of the driver. 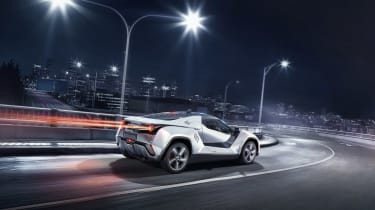 There are some neat touches though, notably the oversized gearshift paddles and enormous pull straps to open the doors. A race version ("Racemo+") pares back the cabin even further, also taking on deeper front and rear aerodynamic splitters and gaining a rear spoiler.

The subject of connectivity and "digital natives" must eventually be breached, and it's the reason for both Tamo and the Racemo's existence. The Tamo brand has been created to spearhead Tata Motors' efforts to investigate future mobility solutions without the slow bureaucratic process of an enormous firm behind it.

> Forza Horizon 3 review - The only driving game you'll ever need

And "Phygital"? As you might have guessed, it's a portmanteau of physical and digital, and refers to the activities Tamo sees Racemo owners taking part in, from buying the real car and taking it on track, to its in-car connectivity features, to the car's appearance in Forza Horizon 3 - the first Indian car to do so.

Not quite as bad as we thought, then - and little different to more conventional sports cars such as the Toyota GT86. Tata hasn't yet confirmed when, if, or at what price a production Racemo might be sold.