Jaguar’s all-electric I-Pace is ready to shake up the status quo, and if you liked the concept you’ll love the road car 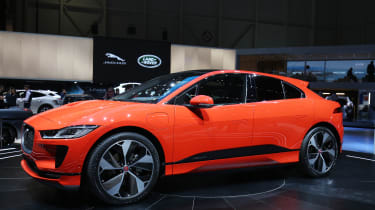 Jaguar’s electric revolution has arrived. 18 months after the I-Pace Concept debuted at the 2016 LA motor show the production version has now been revealed, and the good news is if you liked the concept, you’ll love the road car. This is not just a big deal for Jaguar and its diesel-centric lineup, but a big deal for the industry as it heralds the first major car brand’s answer to the Tesla Model S.

Technical specs have been revealed and at launch the I-Pace will be powered by a combination of two electric motors, one on each axle, producing a combined 394bhp and 514lb ft of torque. Despite weighing in at over 2.1 tonnes, acceleration figures appear impressive at 4.8 seconds to 62mph and a limited top speed of 124mph.

The Range given is 298 miles based on the latest WLTP testing procedure, right on what Telsa quote for its Model S 75D, although the Tesla’s figures are not directly comparable as they don’t yet conform to the WLTP. Recharge times are dependant on the capacity of the charge point, but Jaguar says that the batteries will recharge from zero to 80 per cent in 85 minutes from a 50kW point with the ability to support rapid charge 100kW points in future.

The I-Pace is priced keenly at launch, undercutting its Tesla rival by £1,000 with a starting price of £63,495. Both manufacturers offer the potential models to inflate those prices by a large margin, the Tesla hitting over £120k in top-level trim. While there’s bound to be plenty of industry hype surrounding the I-Pace over the next few weeks and beyond, its significance can’t be underestimated: Jaguar has not only realised the I-Pace in production form, but done so before its larger German rivals have managed to.

> Click here for our review of the Tesla Model S P100D

What makes the I-Pace such a significant step for Jaguar is that it’s not simply an electrified version of an existing model, but rather a ground-up engineering project. One of the benefits of designing an electric car from scratch is the ability to implement a skateboard-style chassis, a packaging development bespoke to battery-electric vehicles. Due to the lack of an I.C engine, the I-Pace offers F-Pace levels of interior space, but on a footprint only slightly larger than an XE. The low centre of gravity should help the handling balance and performance is likely to be spritely beyond its numbers thanks to the instant torque characteristic of electric motors.

Here's the new #Jaguar I-Pace in action. It's powered by a combination of two electric motors, one on each axle,...

The I-Pace has reached production with its concept car looks intact, too. Flush door handles, crisp lighting units and optional 22-inch wheels certainly give the car a distinctive look. Jaguar’s design language has been carried over to a very different set of proportions, while the low-set bodywork split is a clever reference to the bespoke chassis that underpins the I-Pace.

Inside the cabin, Jaguar will utilise its version of the Touch Duo Pro infotainment system also seen in the Range Rover Velar, although the lower screen appears to do without the clever overlapping rotary dials. Otherwise the interior is recognisably Jaguar, but with an added sense of airiness compared to some of the disappointing interiors from the British marque in recent years. The Velar’s premium fabric finish is also available for those who think leather is a bit anti-PC.

Why is an all-electric SUV on evo in the first place? Like them or loathe them, changing legislation and the drive towards electrification will make cars like this a mainstream eventuality - and hard to avoid. This is the first attempt by a mainstream premium manufacturer to crack Tesla’s electric vehicle domination, and while the I-Pace still has a way to go in convincing that this is the future, Jaguar might have made a very shrewd play by making sure it’s an early adopter, rather than its usual position of playing catch up to German rivals. 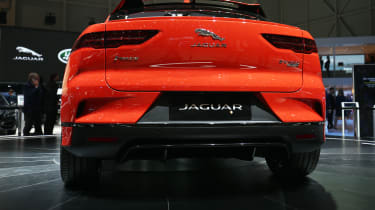 I’m sure that we all saw this coming, but perhaps not from Jaguar itself. Part of getting punters excited about an electric car, or any car, is showing where it holds the edge over its rivals and there’s no bigger rival in the EV field just now that Tesla.

As an element of the launch of the I-Pace, Jaguar decided to put the SUV EV against the Tesla Model X 75D over a 0-60-0mph acceleration and braking test. Predictably, the Jaguar overcame it’s larger American rival, accelerating faster and stopping within a shorter distance. Of course, this test has little relevance in the real world and the win still has a few caveats attached because Jaguar will have to work a little harder to beat a fully-loaded Tesla Model S or Model X P100D with the larger, more powerful motors and battery pack. Still, 0-60mph performance seems to be an important currency in electric car land and, if nothing else, this proves the new I-Pace is no pauper.