Distinctive or distasteful? These are Mansory’s latest, peculiar models from the Geneva motor show 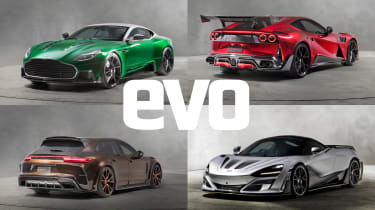 Bavarian tuning company Mansory has outlined its 2018 Geneva line-up, living up to its reputation of producing ‘interesting’ versions of luxury and performance cars from the industry’s top marques. Designed specifically to appeal to those who think a standard McLaren or Rolls Royce is just a little subtle, love them or loathe them, these tuner cars always form an important part of the Geneva motor show.

As is usually the case, Mansory’s changes aren’t just of the aesthetic variety, each of its cars receiving mechanical changes, including uprated engines, revised suspension set-ups and re-trimmed interiors. Below are some of this year’s models, most of which have received the Mansory treatment for the first time. 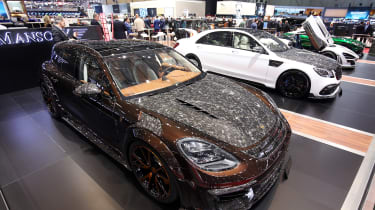 Centre to Mansory’s 2018 Geneva motor show display will be the Stallion, a Ferrari 812 Superfast-based model with Formula 1-inspired styling. Visible carbonfibre features heavily, with the front and rear bumpers, side skirts and rear wing complemented by black 21-inch front and 22-inch rear wheels.

The carbonfibre, like most of Mansory’s cars this year, looks to use a chopped structure similar to that seen on Lamborghini’s Huracan Performante. Mansory has also raised the standard 812’s power output from 789bhp to an outrageous 818bhp thanks to changes to the ECU and exhaust systems.

> Click here for our review of the Ferrari 812 Superfast 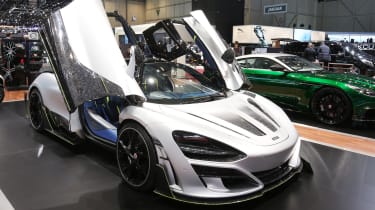 Mansory has used the Cyrus nomenclature on an Aston Martin DBS-based model once before, now bringing it back on a model based on the all-new DB11. Starting life as a V12 version of the British GT, Mansory’s power upgrades will yield a peak power of 690bhp, a generous 90bhp more than standard.

Sitting on 22-inch wheels, the Cyrus sits lower than the standard car, and, thanks to deeper bumpers and skirts, looks more hunkered down and aggressive. A deep front splitter, side skirts and rear diffuser, again utilising chopped carbonfibre, contrast against the green-chrome paintwork and white roof. 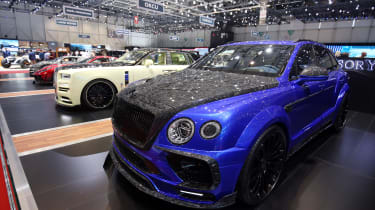 McLaren’s 720S has received its fair share of good and bad press regarding its distinctive styling, but that hasn’t stopped Mansory from putting the British supercar though its own redesign programme. Featuring more exposed carbonfibre, and comprehensively redesigned body panels, the First Edition doesn’t actually stray too far from the standard car, almost looking like something cooked up in McLaren’s bespoke MSO department.

Power has been raised to 744bhp, a subtle 34bhp more than standard, and, like the Ferrari, generated by a combination of a reprogrammed ECU and exhaust system. Mansory has mercifully left the 720S’s complicated pro-active suspension alone, short of reducing the coil-spring heights. 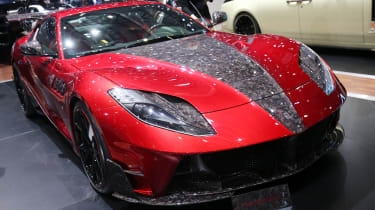 On the Panamera Sport Turismo Turbo model shown at the show, Mansory will uprate the twin-turbo V8 by 34bhp, connected to the same eight-speed PDK gearbox and all-wheel-drive system. New 22-inch wheels, complete with a copper finish, complete the look.

> Click here for our review of the Porsche Panamera