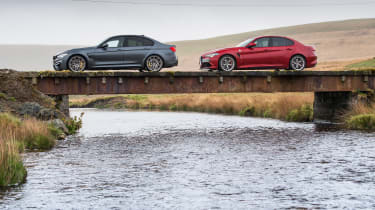 We have a little time before we can lap the Bedford West Circuit, so we bag ourselves a few over-the-limit shots, mindful of preserving the tyres for the business of setting lap times. In a reversal of their wet-weather behaviour, the Alfa doesn’t want to let go and fights to get hooked back up, which makes for some clumsy slide-catch-slides, while the M3 goes easily but, as its engine hits its peaks, slip isn’t consistent. So in both you need to be on top of your game for a tidy slide. Of course, for a fast lap you keep it neat and use the torque for forward motion...

So BMW first. When you’re not trying to provoke a drift, it’s more predictable and effective. With everything set to Sport+ and stability control off, you can feel when you’re about to run out of rear grip, and with the engine working hard that’s just about everywhere the car isn’t straight. Turn-in is positive and it’s an exciting lap, balanced on the limit so that small slides are being corrected even on the exit of the fastest corners, something you can do thanks to the confident poise of the M3. The carbon brakes are a little rumbly by the end but still pulling the car up strongly. The best lap is a 1:24.7.

And the Alfa? It doesn’t start well, the rear swinging with very little provocation at the first turn – an acute hairpin – but at the same corner on the first flying lap it’s found loads of grip and, as we found earlier, once it’s straight it hooks up strongly and will take full power. Body control doesn’t feel as stiff as the BMW’s but the Alfa is responsive thanks to the sharp steering and brakes. Oversteer is available early in the corners but from the apex there is a degree of understeer to push against, which feels useful in the quicker corners. On the third flying lap there’s suddenly no power to be had – the electronic diff has bailed and the stability control has kicked back in. Game over. 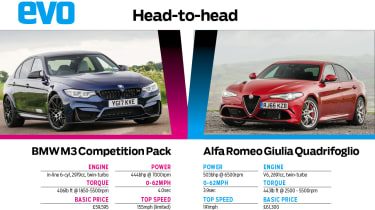 No matter, the Giulia has done the job, nailing a best lap of 1:23.6. The two cars share the spoils in terms of peak speeds before the braking areas but the Alfa carries more speed into the corners, hooks up sooner, and allows throttle-on in the faster stuff. Its gearshifts feel as swift and slick as those of the BMW’s DCT, too. Perhaps, though, the speed of the Alfa is betrayed by its tyres: the right front that does most of the work has suffered and the other three look a bit beaten-up, too. A check of their sidewalls reveals that while the M3’s Michelin Pilot Super Sports have a Treadwear rating of 300 (an ‘eco’ tyre would be 400), the Alfa’s P Zero Corsas have a rating of 60. Roughly speaking, the Michelins should last five times longer...

Considering they are aimed at the same customer, the Alfa and BMW are distinctly different propositions. On the spectrum from comfort to sportiness they overlap to a surprisingly small degree, the Alfa at its sportiest matching the BMW at its most comfortable. So what you expect from your potent, small sports saloon will probably decide which is the one for you.

The M3 is now the car it should have been from the start. Compared with the Giulia, it’s a bit tougher at low speeds, a little less refined, but when it’s up to speed it’s superbly damped and the chassis balance is spot-on – the £3000 Competition Package is a must. It will feel too hefty for some, but it’s a thrilling car with a strong engine note and an exciting delivery that rewards revs. It looks the part, too.

The Alfa is the more nuanced car, more subtle in many ways, with a supple ride and a relaxed long-distance demeanour, yet it always steers with a directness that gives it a wonderfully agile feel. That engine delivers a big hit and works beautifully with the slick auto gearbox, though you have restricted access to its total performance and full-blooded soundtrack – some drivers simply won’t ever use Race because it turns off stability control. Even if you don’t, we wonder how long a set of those Pirellis will last. And yet, for all that, and the unsatisfactory brake feel, it’s hard not to be charmed by the Alfa.