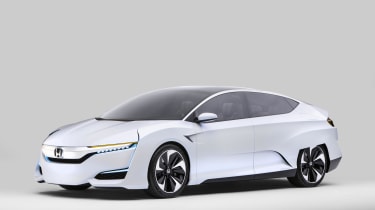 evo readers might be forgiven for overlooking Honda’s fuel cell concept at Detroit – the Japanese firm did, after all, finally launch a spectacular NSX successor – but it’s potentially the more significant car.

Theoretically capable of travelling 300 miles without exhaust emissions, the FCV Concept is powered by hydrogen stored under enormous pressure in Kevlar-reinforced fuel tanks under the rear seats. A stack of fuel cells under the bonnet then converts that hydrogen into electricity, which powers an electric motor driving the front wheels. 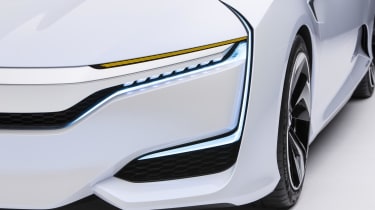 The car takes roughly three minutes to refuel (if, that is, you can find an appropriate station – there are just 11 operational sites in the UK currently) and performance is expected to be similar to that of a diesel hatchback. Between 130bhp and 150bhp is likely, which admittedly isn’t much to get excited about.

Due next year, Honda’s FCEV won’t be the first fuel cell car you can buy – Hyundai and Toyota are already selling similar models – and it won’t be cheap, either; think at least £45,000. But if the sweeping concept design is anything to go by then it may well be the most exciting. 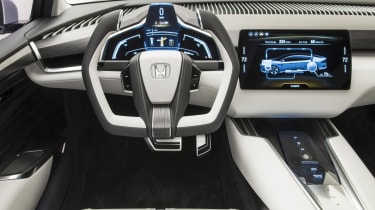 This latest concept is a more practical interpretation of the wild show car that debuted at the Los Angeles motor show in 2013, and features partially faired rear wheels and a heavily tapered roofline to aid aerodynamics.

There’s evidence to suggest that Toyota spectacularly dropped the ball when it styled the awkward hydrogen-fuelled Mirai. Perhaps Honda can gain from that mistake and finally capture our imaginations with a zero-emission vehicle.