The FN2-generation Civic R is the black sheep of the Type R family. 8 years on from its launch, is it worth a second look? 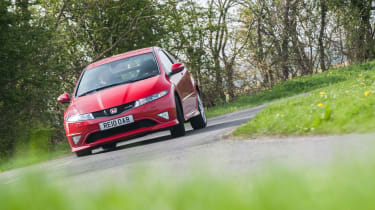 And it’s over that final stretch that this Type R comes truly alive. There’s a hint of Ferrari-esque howl. The gearchange, already slick, seems to relish changes at the red line and doing so drops the engine well inside the VTEC power band for another chase towards 8000rpm. Even evo’s favourite Type R Honda, the Integra, doesn’t make things that easy.

Why in Soichiro’s name have we become so obsessed with turbocharging? The answer, of course, is emissions, though a gently-driven Type R is hardly a profligate machine – following evo’s Type R event at Honda HQ, a 70mph motorway run up to the office returned near-40mpg economy. Only on official tests will the modern turbocharged equivalents really go further, drinking like Barney Gumble the moment the turbine spools in everyday driving.

Some of the Type R’s other characteristics we’ll happily leave in the past. One is its ride quality, which feels stiff for the sake of superficial sportiness. It certainly doesn’t have damping to match – it thuds over bumps without any effort to absorb them and ridges in the road drag it to and fro. There are those who claim the torsion beam rear suspension of the FN2 is unbecoming of a ‘true’ Type R – perhaps the relatively unsophisticated layout is a compromise too far. 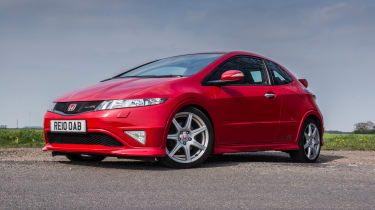 A lack of feel from the steering doesn’t help. Light at low speeds, it weights up artificially at higher velocities without feeding much back to your hands. It’s certainly pointy in a way familiar to modern hot hatch fans – and in a way the older car’s lower-geared rack really isn’t – but combined with the harsh reaction to bumps, driving quickly often seems a little like hard work.

Most will form their own opinions on the interior. I happen to quite like it – you sit a little high and the it lacks the EP3’s expansive view out as compensation, but the gearknob is still just a hand-span from the steering wheel, a large rev counter sits front and centre, and reach adjustment in the wheel leaves your arms less outstretched than they are in the older Civic. Those Recaro seats are fantastic to look at and comfortable enough over distance too, with hefty bolsters to hold you in place as the car jiggles through corners.

If you can live with the ride – it’s a lot easier to accept now examples of the breed can be found for as little as £5000 – and don’t mind the chassis’ deficiencies, the Civic Type R is one of those cars where an ownership case can be made on its engine alone.

Not because it pairs such searing characteristics with reliability – though that’s a bonus too – but because, with even Honda itself turning to turbocharging with the next Type R, it really could be the last of the breed.