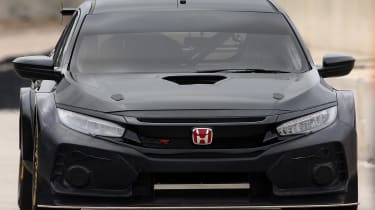 Halfords Yuasa Racing has just whipped the covers off its new 2018 BTCC Honda Civic Type R before its initial bout of testing. Seen with all-black paintwork, the liveried cars will be revealed in time, but for now we can still appreciate the menacing look of the 2018 car.

Based on the road-going Civic Type R that we are very fond of, the new BTCC car should make good use of the lower centre of gravity and wider track compared to its more upright predecessor. Triple BTCC champion Matt Neal and new signing Dan Cammish will be first behind the wheel at Spanish circuit Parcmotor Castellolí before the car returns to the UK for further development. 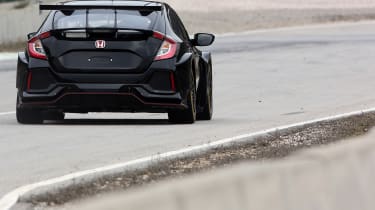 Former champ Neal said in an interview regarding the new car: ‘This next-generation Honda Civic Type R is fantastic and the guys have pulled out all the stops to get us to this point. I can't wait to jump in and get out on track this week. If the car goes as fast as it looks then we'll be in great shape this season!’

The 2018 season of the BTCC will open at Brands Hatch in early April, but for the moment, Honda’s development will be based on returning to the top of the BTCC championship after its top driver in 2017, Gordon Shedden, finished in fourth.