Looking for that perfect used Civic Type-R? Here’s the low-down on the high-revving Honda 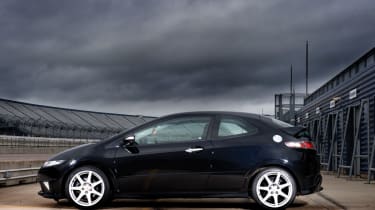 We spoke to Tom Gannon at TGM Sport, an independent Honda specialist and one of the UK dealers for Mugen products. TGM Sport sees more examples of the preceding ‘breadvan-style’ Civic Type-R, but since the two cars share many of their mechanical parts, their experience is worth listening to.

There have been no reports of major issues with the 2-litre twin-cam in the new-shape FN2 Type-R. However, in the previous version the engine did have a reputation for inconsistent oil consumption, as Gannon explains. ‘There seemed to be no real rhyme or reason as to why some cars would use a lot of oil and others none at all. For example, we’ve seen cars with blown engines just 3000 or 4000 miles after they have been serviced. The owner assumed that the oil level would be OK and didn’t bother checking until it was too late, if at all.’ So check the dipstick – the oil should be just below the upper mark. If it isn’t, the car probably hasn’t been looked after.

Some cars have experienced a starting problem when the red button is pressed. It's caused by the starter not engaging on the flywheel and requires the latter’s replacement, so make sure it starts ‘on the button’.

TransmissionSome owners of early (2007) cars have reported problems shifting into third gear, and even in some cases the ’box jumping out of third. Replacing the synchro appears to fix the problem, and many cars had this done under warranty. If you’re looking at an early car, it’s worth asking if this has been done, and paying special attention to the shift into third on the test drive. The clutch should work smoothly and without any creaking noises, which would indicate a worn clutch release bearing.      TMG have fitted a number of FN2 Civic Type-Rs with an aftermarket limited-slip differential. According to Gannon, ‘it transforms the grip and they way they handle’.

Honda’s decision to replace the previous Civic’s purebred rear double-wishbone set-up with a torsion beam means owners looking to upgrade their suspension face a more challenging task to adjust the geometry: ‘We always reset the geometry if we carry out any work on customer cars,’ says Gannon. ‘On the FN2 this involves shimming the rear hubs to achieve the correct settings.’

One complaint about the new car was that the brakes never felt as sharp as they should be. ‘This is probably down to the specification of the pad material,’ explains Gannon, ‘as the actual hardware is the same as the predecessor. We fit a lot of cars with brake upgrades, particularly for the road, as the standard versions lack bite and stopping power. A set of uprated pads, braided hoses and high-performance fluid transforms it.’

BodyworkAny FN2 Civic is still a pretty new car and shouldn’t have any major rust issues, so if there is any evidence of repairs or respraying, view with real suspicion. That said, the top edges of the doors can start to rust from under the trim.  If treated it’s not a problem but, if not, it can develop quite quickly, so check carefully.

The paint is quite thin so you may well find stone-chips, particularly on the bonnet. So long as they’re touched-in, it’s not a problem.