Wacky styling, futuristic dash, high-revving naturally aspirated twin-cam and Honda engineering. What's not to like about the Honda Civic Type-R? We tell you. 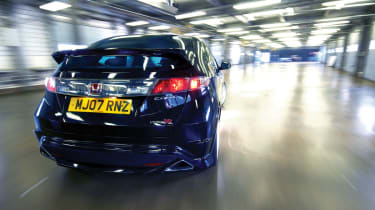 Even before The Fast and the Furious brought so-called ‘rice rockets’ to a wider audience, Japanese performance cars already enjoyed a fanatical following. Not only were they excellent packages straight from the factory, there was a wealth of tuning options available.

Honda has frequently been at the forefront, using its ‘Type-R’ badge to denote a lightweight, semi-homologation special. One of the earliest cars to wear the badge was the brilliant NSX-R but perhaps the best-known is the Civic.

The previous incarnation of the Civic Type-R, built from 2001-2005, was a cracking hot hatch with a strong enthusiast following, so when its replacement, code-named FN2, was launched in the UK in early 2007, great things were expected.

The new car’s shape polarised opinion, as did the space-shuttle dashboard. Honda was on safer ground under the skin, because the new Type-R got the same naturally aspirated 2-litre, 16-valve variable valve-timing ‘VTEC’ engine from the previous model. Power was up only a fraction, from 197 to 198bhp, but Honda had smoothed the VTEC’s marked step-up in power delivery by re-configuring the variable timing settings and introducing a different profile for the high-speed cam.

The new car used the same, brilliant six-speed manual gearbox and a slightly shorter final drive, but the kerb weight had gone up by around 60kg, which slightly blunted any performance gains. We recorded 0-60mph in a respectable 6.8sec (identical to the previous version).

On the road, you still had to keep the revs up to make properly quick progress, but that’s always been the Type-R way. What was slightly disappointing was the chassis, which lacked a little feedback and interaction. The electrically assisted steering was particularly lacking in feel. But the Civic had plenty of grip and a sporting ride, and when you were slotting the stubby gearlever around the gate and making that VTEC engine sing, it still had plenty going for it.

For the real hardcore driver, though, there are a number of variants worth considering. The Championship White was a special edition that arrived towards the end of 2008, boasting a mechanical limited-slip differential that really sharpened the handling and brought some genuine involvement. Equipment-wise, it was specced to the same lavish standards as the ‘GT’ version which accounted for 90 per cent of Type-R sales.

There are also two Mugen versions that you might come across. The rarest is a full-on road-racer of which just 20 examples were built by Mugen's UK operation and cost an eye-watering £38,599. With 237bhp, it was a proper little Touring car.

Then there was the Mugen 200, which came out in Spring 2010 and effectively replaced the Championship White, having the same limited-slip diff and similar cosmetic tweaks. As the name suggests, just 200 were produced. Best of all is the Japanese-market Civic Type-R, actually a four-door saloon, never officially imported to the UK but one of the true greats.

It was a sad day when Honda announced that it would cease production of the Civic Type-R. The engine doesn’t meet the 2011 Euro5 emissions regulations and Honda didn’t want to dilute the Type-R’s essence to comply. You have to admire that sort of engineering purity. It also means that if you want a Civic  Type-R, then pre-owned  is now the only  way to go.

Mohammed Jounis - 29-year-old student Mohammed has only owned his Type-R for five months but he’s already smitten.‘I’ve had the car for five months and I really like it. It’s a great everyday car and the space inside is really good, especially in the back – I can get three friends in no problem.

‘It’s my first new-shape Civic, so the interior and in particular the dashboard took a little getting used to. But I like the fact that it’s clearly all designed with the driver in mind – everything is angled towards you and is in just the right place. ‘I love the way the car drives – it’s real fun. The engine is very responsive, as is the chassis. It feels nimble yet sure-footed and very well balanced, even for such a small car. It feels very stable and the ride is pretty good, although it can feel a bit ‘crashy’ at times.

‘The grip is great though – I’ve never felt like it was on the verge of getting out of control. You can really chuck it around and it just sticks. It can be a bit noisy at times but the stereo’s really good too, so I just turn that up…’