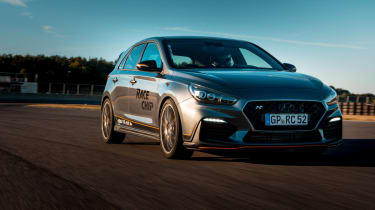 There’s no argument that Hyundai’s first proper attempt at creating a hot hatch has been supremely successful – just about everyone who’s driven the i30 N agrees it’s a feisty little devil. But there’s always someone who hankers after a little more and if you’re one of those people then German tuning frim RaceChip may have the answer.

Its latest development vehicle features a performance upgrade, a new exhaust downpipe, a suspension upgrade and new wheels and tyres. In its standard 'Performance' form the i30 N develops 271bhp and 260lb ft of torque and RaceChip claims its performance upgrade brings these figures up to 309bhp and 367lb ft – gains of 38bhp and 107lb ft. This is achieved with a RaceChip ‘GTS Black’ tuning box that monitors and adjusts boost pressure, intake manifold pressure and the camshaft sensors to achieve its power and torque gains

> Click here for our review of the standard i30 N

While these gains were impressive RaceChip felt there was more to come from the engine so it challenged its exhaust partner, HJS, to produce a downpipe for the car. It’s released a little more power and torque – 7bhp and 20lb ft – which endows the i30N with the same power as the Civic Type R but comprehensively outclasses its torque output by 92lb ft. RaceChip says the revised downpipe allows the turbo to spool up a little faster and also endows the i30N with an even fruitier exhaust note than the already tasty standard car. 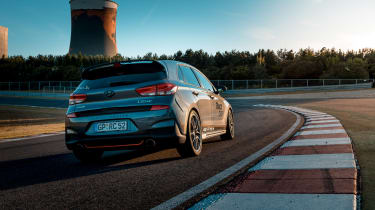 According to RaceChip the performance has improved, particularly over the 100-200km/h (62-124mph) range and its figures support this. In standard form it recorded a time of 15.3sec, with the performance upgrade that dropped to 14.9sec while the addition of the HJS downpipe reduced it still further to 14.4sec. While these figures haven’t been independently verified they do show useful gains.

To add some additional poise to the i30N RaceChip has added a set of Eibach lowering springs that drop the car by 15mm while it has also added a rear anti-roll bar kit, too. Wheels are O.Z. Leggeras (8.5x19-inch all round) and while the tyres measure the same as the originals (235/35 ZR19 all round) RaceChip has fitted Michelin Pilot Sport 4S rubber for additional grip.

The cost of tuning parts can be excessive but RaceChip’s performance upgrade would appear to be relatively keenly priced at €749. The price for the downpipe has yet to be finalised as at the moment it is a one off, but it is expecting to be able to bring it to market soon. The Eibach springs and anti-roll bar kit come in at €805 while the wheels and tyres are an additional €2332.