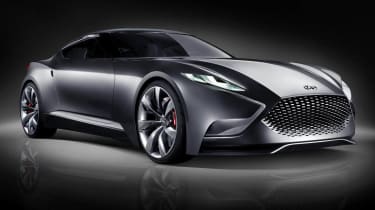 Hyundai’s HND-9 concept debuted at the 2013 Seoul motor show. It’s described as a ‘luxury sports coupe’, and is said to preview the company’s future design direction. Here’s hoping that extends beyond a borrowed taillight or similarly shaped grille – this is an intriguing-looking car. The HND-9 is rear-wheel drive, with power coming from a 3.3-litre turbocharged V6 petrol engine which is mated to an eight-speed automatic gearbox. It serves up 365bhp – almost twice as much as the next most powerful Hyundais in the UK, the 184bhp Veloster Turbo and 194bhp Santa Fe SUV. Measuring 4695mm long, 1890mm wide and 1340mm high, the HND-9 most closely compares to a BMW 6-series in size. It’s a bit more eye-grabbing to look at, though, with upward-opening ‘butterfly’ doors, large exhaust tailpipes and 22in part-carbon wheels. The interior is wilder yet, with seats that ‘project different colours when viewed from different angles’ and one of the more curiously shaped steering wheels we’ve seen. The HND-9 is rumoured to represent the replacement for the rear-drive Genesis coupe, which is sold in markets outside of Europe.