Modified Hyundais to go on display at SEMA 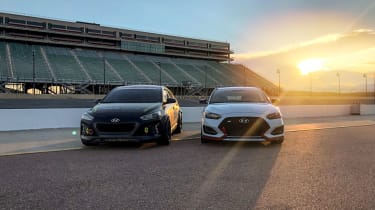 With just over a month to go before the doors open for this year’s SEMA show, the world’s largest aftermarket event, Hyundai has revealed two modified cars that will go on display. Both the soon-to-be released (in America, but not Europe) Veloster N and the Ioniq Electric have undergone a range of upgrades so they can compete in their respective classes of the 2018 ‘Search for the Ultimate Street Car’ races.

The upcoming Veloster N uses the same drivetrain as the Hyundai’s excellent debut hot hatch, the i30 N Performance, made up of a 271bhp 2-litre turbocharged engine, six-speed manual gearbox, electronically-controlled LSD and adaptive dampers. However, for the Las Vegas aftermarket show, Hyundai has pushed the car a step further and made the sort of upgrades that typical driving enthusiast might add.

> Read our review of the Hyundai i30N 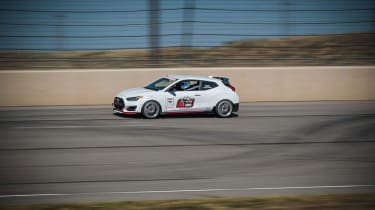 The new wheels and ride height aren’t the only noticeable changes from the outside, Hyundai has added a new front splitter and side skirts. While inside there’s two Recaro SPG seat and Sparco harnesses.

The modified Veloster N will compete in the GTC class of the Ultimate Street Car championship against Mazda RX-7s, Honda S2000s, Ford Focus STs and Subaru BRZs, amongst others. The Ultimate Street Car competition comprises of five sections, three timed segments (two autocross style events and a lap time), a regularity-style road rally and, finally, all cars will be judged on their appearance and how well they’ve been prepared.

Five rounds of the Ultimate Street Car championship have already taken place, so as a result Hyundai’s modified Veloster N is only confirmed to compete in the penultimate round at Autoclub Speedway in California. Hyundai hopes that its performance coupe will be invited to join in on the final round at Road America – to qualify the car will need to score enough points in the round it enters or win a single event.

Hyundai’s fully-electric Ioniq has undergone a similar, even more thorough set of modifications. There’s a set of Wilwood brakes, lowering springs and 18-inch Volk Racing wheels, while performance has been improved by a more powerful electric motor from the Kona Electric, a Drexler limited-slip differential and improved cooling for the motors and batteries, including the use of the air conditioning condenser. 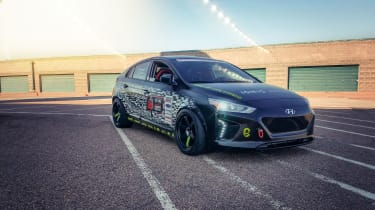 The GTE class the Ioniq Electric will compete in isn’t as well populated as the Veloster’s, only four other cars are entered: three Teslas and a Chevrolet Spark. Like the Veloster, Hyundai is only entering its tuned Ioniq into the last-but-one round of the championship, but it still hopes its electric racer will also accumulate enough points or win a section outright so that it will be eligible for the final round.