As mentioned above, the LC Coupe is available in two distinct forms, which totally changes the LC’s character above all else. The more demure, sensible option is the LC 500h, which as its name implies, is a hybrid. This is no Porsche Turbo S e-Hybrid-style powerhouse, rather a more laid-back combination of the Toyota group’s naturally aspirated 3.5-litre V6 engine and a small electric motor and lithium-ion battery pack. Instead of being able to run on pure electric as a plug-in hybrid, the LC 500h’s parallel system is more about engine assistance. Power is fed into the batteries by a regenerative braking system, and power fed from the petrol engine.

The transmission is equally non GT-like, featuring a new type of CVT gearbox. Rather than simply have a single belt-driven gearbox with infinite ratios, the Lexus instead has a total of three, CVT-like gears, each with three ‘steps’ within them to emulate the feeling of a short, sharp gearshift. There is then another, fourth gear which brings the total to ten, real and/or virtual gears. This gives the impression of shifting gears as the car accelerates, more akin to a normal automatic transmission.

The second engine and transmission combo is more traditional, pairing a naturally aspirated 5-litre V8 engine with a ten-speed torque-converter automatic gearbox. The engine is the same Yamaha-fettled unit found in the current Lexus RC-F, and it’s a wonderful, sonorous, charismatic unit that totally redefines the LC. The hybrid, although not inherently bad, is a calmer, diesel-equivalent GT cruiser. Paired to this V8 though, the LC’s character totally changes. The auto’s shifts are short, sharp, and in sports mode decisive, but left to its own devices can dither about – a complaint common with many transmissions with so many ratios to choose between. 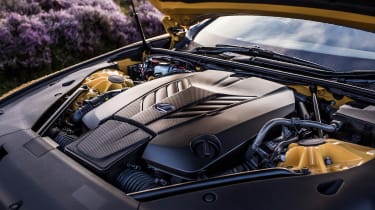