The Lexus LC Coupe in both hybrid and V8 forms is not the fastest GT car in its class, that’s for sure. The hybrid, despite a reasonable 359bhp combined power figure, takes a leisurely 5.0sec to reach 62mph. Performance then, is hardly electric, but as a cruiser the hybrid’s powertrain does just about enough to make it feel fast enough for cruising situations. Top speed is pegged at 155mph.

The LC 500 V8 is only 0.3sec quicker, reaching 62mph in 4.7sec, despite the generous bump in horsepower. The V8’s 458bhp isn’t that much more accessible either, thanks to its 7100rpm peak power, although we’ll get back to that later. The crux with the LC Coupe in all its forms is that if you’re expecting this GT to be supercar fast, you won’t find it in the LC, but, and we’ll get to it, is all part of the charm. 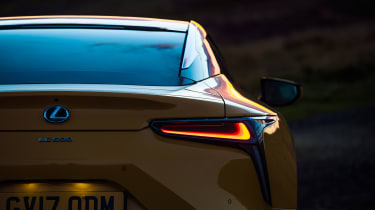