The interior of the LC is wonderful and irritating in equal measure, as the design is fresh, distinctive and wonderfully executed, but hampered by irritating electronics.

You sit low in the LC, and the shelf-like dashboard and narrow daylight openings do make it an initially intimidating place to sit, but the interior’s innate quality and thoughtfulness is clear. The focused driver’s display isn’t new for Lexus, having been applied to various models since its debut in the LFA supercar, but its effect is no less dramatic, and it still looks sharp, uncluttered and distinctive.

Other elements, even simple ones like the interior door handles, display a different level of thinking that Japanese manufacturers like Lexus and Mazda have begun to employ with great effect. The handle itself is smooth, cold aluminium, and has no backing, rather sprouting from the concave Alcantara sections on the door. Why Alcantara? Lexus has applied it there specifically to brush against the back of your hand as you reach for the door handle. Novel or creepy? You decide, but it all adds to the aura. Be brave with the interior colour specification and the LC Coupe’s interior can look just as avant-garde as the exterior, which says a lot. 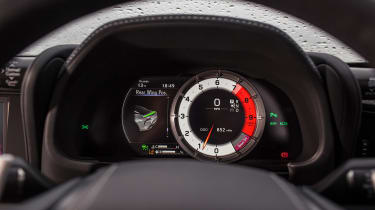 Then we come to the infotainment system, which like so many Lexus systems is a complicated mess of sub-menus and a flawed input method. A common test is how long it takes one of us to disable the navigation after first getting into a new car and leaving the office at the end of the day. The Lexus system took over five minutes – it’s not slick, clever or intuitive.

The LC’s exceptional build quality is undeniable though. Simple elements – the button to open the glovebox, the feel and movement of the volume knob, the spring of the drive mode selector – all of it feels finely honed and perfectly executed. There are next-to-no shoddy plastics, the leather is smooth and aromatic – it feels like an interior of something far more expensive.