Approach the LC as a pure GT and it has one fatal flaw. The ride is too hard-edged, even on the entry-level model’s smaller 20-inch wheels. It’s not unsophisticated, as the adaptive dampers do keep sharp intrusions to an acceptable level, but it’s the stiffness of the springs themselves that are the issue. As a result, the LC 500h is a little contrived, as its powertrain doesn’t indulge or encourage, yet is too stiff to make for a comfortable GT.

The V8-powered LC 500 is a totally different proposition, as its engine completely changes the character of the car, unlocking a different side to the LC. The firm ride is suddenly less of an issue, as the V8 is the ultimate sidekick, encouraging you to exploit the chassis, unveiling its wonderfully playful and agile stance.

The car doesn’t quite shrink around you, but its limits are instantly palpable, the steering, although not feelsome (so few, if any, really are these days) accurate and reliable in its turn of response. It’s a surprisingly quick rack too, and whether it’s paired to the LC’s four-wheel-steering system or not, turns in quickly and decisively, with an accuracy and composure underpinned by the innate capability engineered into the chassis. It really does feel like a giant GT86, in the best way possible. 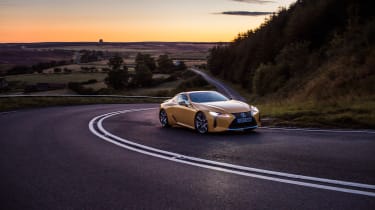 You’re never left wanting for more power either, in fact it’s this relative lack of grunt that seems to more gently introduce you to the LC’s underlying character, which is just so entertaining.

Start to push harder and the exploitable balance remains, even if traction doesn’t. The playful edge means that wheelspin can be an issue, especially without its limited-slip differential, but it doesn’t detract from the overall experience by any stretch. The LC 500, in V8 form anyway, is a truly unique car in the segment; one that all of us in the evo office have been totally won over by.