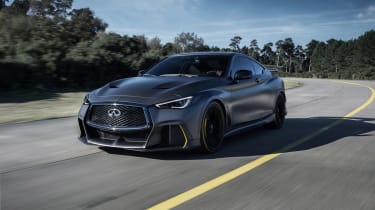 The Black S’s engine and interior aren’t the only aspect of the car that’s been inspired by the company’s ties to Formula 1 and racing, as its new rear wing has been designed using know-how from the pinnacle of motorsport.

Ahead of the motor show, Infiniti released greater details on the car’s twin-turbocharged, ERS (energy recovery system) assisted powerplant. Based on the company’s 3-litre VR30 twin-turbocharged V6, the engine is assisted by a trio of motor-generator units (MGUs). One is an MGU-K – for ‘kinetic’ – which recovers energy under braking, while the other pair – MGU-H, for ‘heat’ – harvest energy from the heat produced by the two electric turbocharger compressors. The energy generated is stored in a lithium-ion battery pack to be used to help propel the vehicle later.

> Read our review of the Infiniti Q60S

Combined, the engine and electrical assistance add up to 563bhp (against 400bhp for the engine on its own). No combined torque figure is quoted, but with a power-to-weight ratio of around 315bhp/ton (the Black S comes in at around the 1787kg mark), Infiniti claims a 0-62mph acceleration figure of under four seconds. 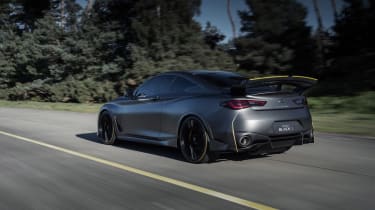 The Black S’s similarity to F1 cars – at least in theory – goes further, with the addition of a new rear wing for the concept being shown in Paris.

While it doesn't quite have the dimensions of a Formula 1 wing, the company says it’s similar in profile to the low-drag set-up used by the Renault Sport Formula One Team at the high-speed Monza circuit, albeit modified for the dimensions of the Black S.

How effective it is on a road car is open to interpretation – a profile designed for low drag in an F1 car probably doesn't produce a huge amount of downforce at road car speeds – but Infiniti claims stability and traction improvements regardless.

The centre console of the Black S is a set of yellow switchgear that can be used by the driver to swap between the car’s many driver modes. Again inspired by the racing connections, the switches alter the car’s powertrain, traction control, ABS and activate a launch-control function, much like the buttons on the steering wheel of Renault’s F1 cars. 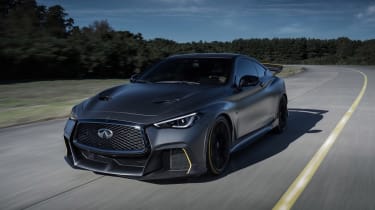 Despite its name the Black S is actually in a dark grey matt finish. The paint alone highlights the Q60’s existing curves and makes the front arches look stretched and the rear three-quarter more defined and stronger. But it’s just an illusion, as most of the Q60’s body has been left unchanged.

Appearances aside, the Black S isn’t simply a Q60 with some new paint and an off-the-shelf wing and a diffuser. The concept gets re-profiled front and rear bumpers, arch extensions to cover a wider track, wheel-well vents, new sills, cooling vents in the bonnet as well as a bespoke wing and diffuser. Each of the new elements has been designed to complement and accentuate the Q60’s existing sculptured shapes and surfaces.

Matt Weaver, Infiniti’s European design director, showed evo around the car during the 2017 Geneva motor show, and described the process in transforming the Q60. 'I like aggressive cars, but it has to suit the style of the car. We've taken cues from the Q60's sculpture and the surfaces so everything now has an elegance to the surface as well as being quite purposeful.'

When asked if adapting the Q60’s distinctive, almost decorative exterior, to a bolder, more macho look was a difficult task, Weaver said: ‘The Q60 has a strong image. So no, it was easy to contrast the elegance and the car takes it very naturally.'

To integrate the new aerodynamic items the team followed the same philosophy with the Black S modifications as it does on every project, including entire cars. ‘We call it hand of the artist, or hand of the craftsmen,’ Weaver explains. The result is that each new element has a delicate, organic shape.

The flicks and shapes that Weaver and his team have created to suit the Q60's appearance, coincidentally, look similar to the modern wings that appear on modern Formula 1 cars and further signify the relationship that Infiniti has with Renault Sport F1.

The Japanese company has shared information and technology with the F1 team for years; Renault Sport F1 helped refine the V6 that’s in the Q60 and Infiniti helped develop the energy recovery system in this year’s F1 car, the R.S. 17.

As the Q60 Black S is just a concept for now the example on display is mechanically identical to the production Q60. However, as the project continues, Infiniti plans to adapt the F1 car’s ERS package to suit the road car’s 3-litre turbocharged V6.

The ERS in the F1 car harvests energy during braking and from the heat of the exhausts, and converts it to electrical energy that is then stored in a lithium-ion battery pack. The electrical energy is used to help spin the turbo’s turbine shaft to help reduce lag, and also adds torque directly to the drivetrain.

As well as the aerodynamic additions, Infiniti has also focused on improving cooling to the engine in the Black S, should it ever need to cope with the extra power. The distinctive grille on the Q60 hasn’t changed, but the bodywork around it has been flared out so air can enter either side rather than just through it. Vents have been cut into the bonnet and the lower bumper has significantly bigger and wider openings, too. 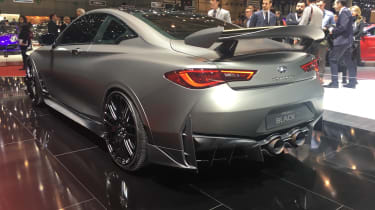 > Read our review of the BMW M4 GTS

Infiniti says that the Black S will also receive an appropriately upgraded chassis. The exact details haven’t been released but the concept sits on new 21-inch wheels, and spats have been added to the arches to cover the extended track width.

Infiniti hasn’t confirmed whether it will actually build the Q60 Project Black S, or not. Instead the concept is to introduce the Black S as the top-of-the-range model line, and assert the attitude that cars that wear the badge will have. Infiniti’s current flagship car, the Q60 Red S, combines luxury with a hint of performance. Cars sporting the Black S trim, as clarified by this concept, will be more performance oriented.

So even if we aren’t lucky enough to be treated to a full production Q60 Project Black S, we will see other Infinitis with increased performance, more focused chassis and more aggressive exteriors.