Updates may not raise the Q50's game too far, but it's still an appealing alternative 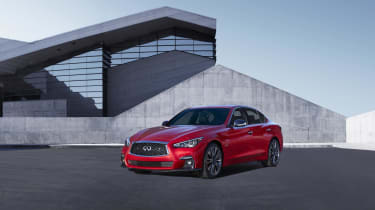 Hidden among the supercars and SUVs at the Geneva motor show, Infiniti has quietly updated its Q50 compact executive saloon - the oft-forgotten Japanese rival to the BMW 3-series, Audi A4 and Mercedes-Benz C-class.

It's largely forgotten as it's not quite as complete a product as its German rivals (nor indeed the Jaguar XE or Lexus IS), but a small facelift and the introduction of new technology should make it more appealing to its small, loyal band of followers for whom even the IS is too predictable.

At the top of the range Infiniti has created a new Red Sport 400 trim level, which not unexpectedly utilises the most potent version of the brand's 3-litre twin-turbocharged V6, developing 395bhp at 6400rpm and 350lb ft of torque from 1600-5200rpm. Other engines include a 205bhp 2-litre four-cylinder petrol, and a 166bhp, 2.2-litre turbodiesel. A 355bhp, 3.5-litre V6 hybrid is also on the way, while rear- and four-wheel drive setups are available.

> Details on the Infiniti Project Black S concept at Geneva

The front end of the Red Sport 400 - itself revised in all models with an updated grille - gets a more angular front bumper and wider air intakes, as well as a front splitter to reduce lift. The rear bumper is different to standard models too, housing a twin exhaust setup and a two-tone rear diffuser. Red Sport 400s sit on 19-inch alloy wheels.

All revised Q50s get LED headlamps and LED taillights derived from those of the more recently-launched Q60 coupe. Between standard models and the Red Sport 400, a new Sport grade adopts some of the changes of its more potent brother. 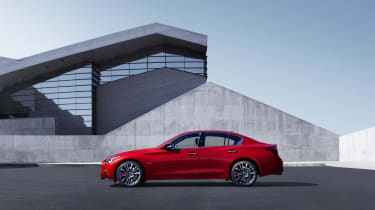 The cabin has come in for a refresh too, with what Infiniti calls 'an enhanced level of artistry and quality'. In simpler terms that means a wider use of leather-effect trim across the instrument panel, but more traditional materials like wood are still available to embellish the dashboard. More Q60 inspiration comes in the form of an updated steering wheel, a different gear selector and new seats.

To thise, Red Sport 400 models get red stitching, quilted side inserts to the seats, and a matte chrome finish to the instruments. Aluminium and matte dark chrome trim also features widely.

On the technology side, Infiniti has tweaked its two-touchscreen setup on the dashboard - a slightly confusing arrangement at first, but one that places most frequently-used functions on the top screen and others below. Infiniti's 'InTouch' services can store driver preferences based on profiles loaded into the key, as well as access to a 16-speaker Bose sound system.

> Infiniti Q60S review - Can the Japanese coupe compete against its German rivals?

With driver assistance technologies becoming more popular in the sector, Infiniti has also introduced a suite of such systems to the updated Q50. They're based around the second generation of the firm's Direct Adaptive Steering - a steer-by-wire setup that we've found difficult to gel with thanks to a disconcerting lack of feedback, though one adaptable via selectable drive modes.

Steering weight and "feedback" can be adjusted through Personal, Standard, Snow, Eco, Sport, and Sport+ settings - with Standard claimed to be most similar to a conventional steering setup. Adaptive suspension is also available.