Bold colours and big V8s, but which is the one to go for? 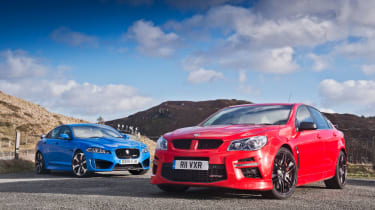 With their pram handle rear wings, vibrant paintwork and ripping supercharged engines the XFR-S and VXR8 are most definitely the wild children of the current super saloon crop. They’re also among the most characterful and for those buyers who want to distinguish themselves from the multitude of German car drivers they are the only current alternatives.

Neither the XFR-S nor the VXR8 particularly concerns themselves with downsizing or fuel efficiency. It isn’t often that a supercharged Jaguar is outpunched, but on this occasion the big Vauxhall puts its output figures to shame.

Using a 6.2-litre LS1 V8 with an Eaton supercharger, the VXR8 is good for 576bhp and 546lb ft of torque from 3850rpm. The Jaguar, meanwhile, is powered by a supercharged 5-litre V8 that develops 542bhp and 502lb ft from lower down in the rev range – 2500rpm. Both engines are mighty powerhouses that are full of charm.

The Jaguar uses an eight-speed automatic gearbox, which suits the car well and shifts cleanly in both manual and auto modes, while the Vauxhall uses a six-speed manual. That makes it a unique proposition in this sector and it also draws you into the process of driving in a way that no other super saloon does. The shift action is heavy and the throw is long, but it’s perfectly suited to the car as a whole.

With so much power and torque on offer both the XFR-S and VXR8 are thumpingly quick. In contrast to the modern twin-turbocharged engines that are prevalent in this sector of the market today, they deliver their torque in a very linear way with immediate throttle response. That might cost them the brutal shove in the back of an Audi RS7 or BMW M5, but the trade off is that they feel more natural and exploitable when you’re really pressing on.

The Jaguar is marginally quicker off the line – it hits 62mph in 4.6 seconds, compared to 4.9 seconds for the Vauxhall. Those figures only tell half the story, though, because both cars – rear-wheel drive only – are so traction limited from standing starts that they record unrepresentative acceleration times. Through the gears these cars will hold off a Porsche 911 Carrera S.

The VXR8 is limited to 155mph, which means the 186mph XFR-S boasts a significant advantage at the top end.

Both the XFR-S and VXR8 feel a little more relaxed in the way they ride over a bumpy road than the M5 for E63 – and that translates into a very different kind of driving experience.

In short, there’s more body movement in each car than you’d find in any of the German rivals. Rather than feeling completely locked down over crests and in corners, both the Jaguar and the Vauxhall roll and lean as the forces build. There the similarities end, though, because while the XFR-S’s body movement can make it feel wayward and on the edge of control, the VXR8’s movement instead feels natural and gives you an idea of where the grip is.

The Jaguar also has very light steering. In combination with the body movement that makes the first few miles feel like something of a wild ride – straight line performance is enormous, but the chassis feels loosely controlled. Keep the faith, though, and once you’ve become accustomed to the rate of response in the steering and the amount of vertical movement and roll you soon realise that the car will stick. It isn’t the most intuitive of super saloons at first acquaintance, but in time you learn that it can be flung around with most of the abandon of an M5.

The VXR8 also feels very different to the German competition, but it takes less time to adjust than the XFR-S. It finds enormous grip, the front axle holds a line well and body control is strong, despite the slightly softer setup. The rear tyres also do a decent job of harnessing that monumental power and torque, too, so the big Vauxhall isn’t the handful you might expect it to be.

For the sheer performance it offers, the VXR8 is a total bargain at £54,499. It undercuts the XFR-S by some £25,000 without falling short in terms of performance or the driving experience.

Of course, where the Vauxhall is shown up is cabin quality and badge appeal. There is a small but committed audience for these cars, but the fact is that most German saloon car buyers would be put off by the loud styling and the comparatively cheap interior. That’s their loss, frankly, because the VXR8 is fun and characterful.

The Jaguar also undercuts its German rivals by a useful amount, although it is starting to feel its age, particularly within the cabin. However, if you can live with that chunky rear wing, it is certainly among the better looking of super saloons and it offers all the performance you could hope for.

For those buyers who aren’t put off by the badge or the image, the VXR8 is an easy car to recommend – particularly at that bargain price. The Jaguar remains an appealing car itself, though, and it’s a very worthwhile alternative to the established competition.

To find out how the XFR-S and VXR8 stack up against the best of the super saloon competition, check out May issue of Evo magazine (208).