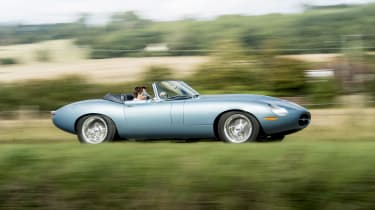 Using its Speedster as a platform, East Sussex-based Eagle has added some much needed practicality to its sleek E-type interpretation with the introduction of the new Spyder GT.

As the sunshine shrinks behind a dark grey cloud the most significant accessory - a new soft top - will be a welcome addition for owners keen to protect the elegant, hand-crafted interior, and of course, their tweed jackets.

Fitting the folding roof to the sleek shell required some tinkering. A taller windscreen, angled with a few degrees less rake, successfully accommodates the roof and lends the Spyder GT a unique appearance, which is no less jaw-dropping than Eagle’s previous works. You’d be no fool to argue the Spyder GT is equally pretty with roof in place as it is stowed beneath the tonneau. Even Henry Catchpole couldn’t resist its aesthetic charms in his review in our latest issue - evo 232. 'There really isn't a bad angle on it, and I say this as someone who isn’t head over heels about the standard E-Type' 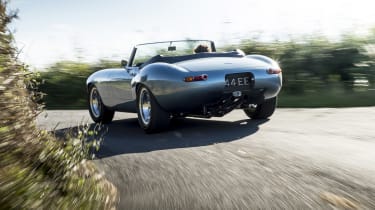 Lift the front-hinged aluminium bonnet and you’ll unearth Eagle's heavily revised version of the original straight-six engine. Capacity is up from 4.2 litres to 4.7 courtesy of a bored-out engine block. The performance gains arrive with 330 bhp and 340lb ft of torque - so it's a brisk march to 60mph, dealt with in under five seconds. The engine loses none of its original character, treating those on-and off board to an 'unfiltered mechanical rasp that you just don’t hear from modern cars.'

Eagle sees the Spyder GT as more than just form over function. They envisage owners embarking on a grand tour to fully indulge in open-top motoring, making the most of what their latest model has to offer. The long-bonnet, British icon is wieldy too; 'The Eagle has such a solid sense of connection that you feel confident pushing it hard,' says Henry in his review.

As with all Eagles, the Spyder GT is a fulfils the smallest of niches for the most particular of owners, so you shouldn't expect to lay eyes on the Spyder GT in the flesh anytime soon. If you do though, you might begin to understand the £834,000 base price...