Jaguar's F-type will get all-wheel drive and a manual 'box in 2015. Full details and pictures here 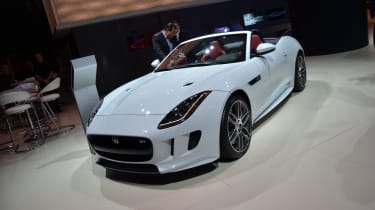 Jaguar has confirmed that a manual transmission will be available on the F-type for the first time when the updated model makes its debut in 2015.

As well as a manual option on V6 and V6 S models, all-wheel drive will also be available on V6 S and V8 R versions, allowing the F-type to, in Jaguar’s words, ‘deliver its performance more effectively in all conditions’.

Drivers will be doing so via another new technological development for the F-type, electronic power assisted steering.

While the mention of EPAS sends shivers down the spine of anyone attuned to the detailed feedback of some hydraulic setups, Jaguar promises it would not have applied the new technology if it wasn’t capable of delivering the levels of feel and response drivers expect.

As such, it has spent the last five years developing a system worthy of inclusion in the F-type, and now feels that its system is not just suitable for the car but better than the best it can achieve with the old hydraulic system.

In contrast, Jaguar’s other major change may be seen as regression by some. At a time when more and more sports cars are moving towards automatic and dual-clutch setups, the new six-speed manual transmission available on V6 F-types will be a breath of fresh air for certain driving enthusiasts.

The transmission has been developed specifically for the F-type – rather than adapted from the manual set to appear in the XE saloon – the gearbox uses a rod linkage for a more precise feel and the carefully-located lever – within a short reach of the steering wheel – has a short throw of 45mm.

It’s available on the V6 only, chosen to complement the 3.0-litre unit’s high-revving nature. The dry-sump gearbox is said to be lighter than the automatic, providing further benefits for drivers who prefer manual transmissions.

Available on both the V6 S and the V8-powered F-type R in both coupe and convertible formats, Jaguar’s all-wheel drive system will be auto-only. It should, however, further enhance the car’s appeal in areas where weather dictates performance as much as the driver does.

In normal driving the F-type AWD should behave much as its rear-drive counterparts, with 100 percent of the power directed towards the rear wheels. F-type chief program engineer Russ Varney says that torque can be directed forwards as necessary, though the system will never send 100 percent of the engine’s output to the front wheels.

Intelligent Driveline Dynamics helps the car dictate torque output between the axles while Torque Vectoring by Braking (TVbB), previously F-type R only, is now available across the range. By braking individual wheels it can mitigate understeer or oversteer in hard manoeuvres.

Externally, only a slightly revised bonnet design – with new vents and revised creases along its length – gives away the AWD car from its rear-drive stablemates, along with a small badge at the rear.

Along with the F-type’s technical changes, two other features will debut for 2015: The F-type convertible range now includes an F-type R model, replacing the old V8 S, while Jaguar’s new InControl Touch infotainment system finally gives the F-type the connectivity abilities it deserves.

The revised Jaguar F-type range makes its debut at the 2014 Los Angeles motor show this week. Check out our Los Angeles show page for more updates and picture galleries from the North American International Auto Show in LA.