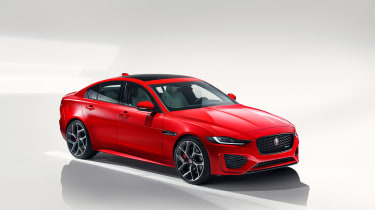 The Jaguar XE has just been given a thorough update to help it compete against rivals such as the new BMW 3-series, the Audi A4 and Mercedes’ C-class. The small Jag, although excellent to drive, has remained something of an also-ran in the highly competitive compact executive class, but Jaguar is hoping to reverse its fortunes by focusing on desirability as much as technical capability.

Design changes on the outside are subtle on first acquaintance, but the new all-LED lighting units front and rear have been reprofiled to give the XE sharper and more distinctive lighting signatures. A new R-Dynamic trim level (replacing the previous R-Design models) also includes a new grille mesh and a more open lower front bumper, while standard models pick up a subtler, but equally fresh look. Together these changes sharpen up the already svelte XE into a sleek and sophisticated-looking compact executive.

> Click here for our review of the new BMW 3-series

The cabin may look familiar too, but it has received a big jump in both tech and perceived quality. At the centre of this is an upgraded HMI, now combining a similar dual-screen set-up to that seen in Jaguar’s I-Pace. It’s important to note that the lower screen, as in the I-Pace, is not the full-width item found in Land Rover models, rather a simplified unit incorporating both a touchscreen and touch-sensitive buttons and knobs into the single pane of plastic.

The rising gear selector has been ditched for the ‘joystick’ selector seen in the F-type, and is surrounded by a redesigned centre console. The new Jaguar steering wheel, with a smaller central boss, has also been brought across from the I-Pace. Although the general interior design has not changed significantly beyond this, Jaguar is placing a greater emphasis on material quality, highlighted by the new satin chrome finish on the steering wheel, dash and centre console.

Beneath the skin, the aluminium intensive chassis remains much as before, as does the selection of engines, comprising petrol and diesel four-cylinder ‘Ingenium’ units. Topping the range will be the P300 R-Dynamic model, which is fitted exclusively with all-wheel drive and an eight-speed automatic transmission. With a relatively modest 297bhp, it’ll get the XE to 62mph in 5.7sec and act as a rival to the BMW 330i or Audi A4 45 TFSi, rather than the more potent M340i or S4. The previous supercharged V6 XE S was quietly killed off due to emissions regulations a little while ago and we suspect that engine won’t make a return any time soon. 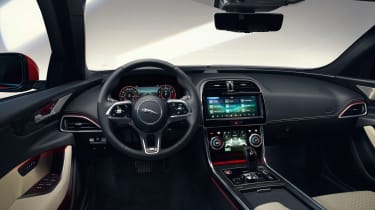 The new XE is priced slightly lower than before, yet now features more standard equipment across the range, including leather seats, 18-inch wheels and those LED lighting units. Prices start at £33,915 for the entry-level D180, and the order books are now open.

With more standard equipment, better tech, improved interior quality and a sharper new look, Jaguar’s hoping the revised XE will appeal on desirability just as much as competence as it struggles to match the industry big-boys in terms of tech, model variety and indeed sales. We’ll have to wait and see if customers agree.