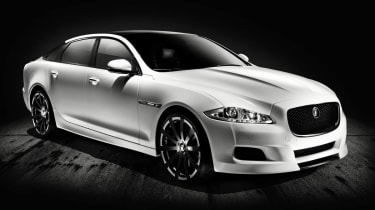 Jaguar has used the Pebble Beach Concours D’Elegance event in the US to unveil this striking XJ75. It’s a special edition of the XJ sports saloon, dubbed the Platinum Concept, and is the strongest hint yet at XJR potential, though previous reports have suggested the (admittedly quite mighty) 503bhp XJ Supersport will be as hot as XJs get. As big fans of previous XJRs, we’d like to think not… The XJ75 – as those clued up may have guessed – is another element of Jaguar’s ongoing 75th birthday party. While the Jaguar XKR 75 (evo road test here) has already taken care of some of the celebrations, this Platinum Concept (while claimed to be a one-off) is aimed much more at the US car market. As such, it uses a 464bhp/424lb ft tune of Jaguar’s supercharged 5-litre V8 petrol engine rather than the full-fat 503bhp/461lb ft version. Of the pair, only the latter is sold in the UK, and while both are marketed in the US, Jaguar’s decided to slot the milder engine into this concept. This is perhaps to fit with the Platinum Concept’s marketing – to make customers aware of the design customisation potential of the Jaguar XJ saloon, and show how its appearance can be fettled, presumably to rival the likes of BMW’s M Sport and Audi’s S Line branding. Highlights include gigantic 22in black alloy wheels, new sills, matt white paint and gloss black finishing. Inside there’s copious use of suede, white highlighting and a bespoke clock developed between Jaguar and the Bremont Watch Company. Naturally, the XJ’s monstrous 1200 watt, 20-speaker Bowers and Wilkins stereo is present and correct. While apparently a one-of-a-kind display of Jaguar’s customisation, we’d be surprised not to see a production edition of the XJ that mirrors the XJ75, in the US at least. We’ll keep hoping that the wick’s turned up under the bonnet and an R badge makes its way to that controversially-styled rear…

See our video of a Jaguar D-Type up Goodwood hill