The new 542bhp, 186mph Jaguar XKR-S is the fastest Jag since the XJ220 supercar. Details and pictures here 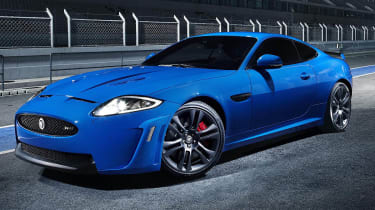 Meet the Jaguar XKR-S, the fastest production Jag since the XJ220 supercar. With an uprated version of Jaguar’s supercharged 5.0-litre V8 petrol engine kicking out 542bhp and 502lb ft of torque, it boasts a 186mph top speed. The XKR-S hits 60mph from rest in 4.2sec and dispatches with 0-100mph in 8.6sec. It will be unveiled at the 2011 Geneva motor show on March 1. Jaguar has been at work on the XKR’s suspension front and rear, fitting stiffer strings and altered dampers together with a slightly lower ride height and wider rear tyres. In addition the Adaptive Dynamics system has been reprogrammed, and according to Jaguar, it’s the firm’s most agile, responsive and driver-focused car yet. Outwardly the S can be differentiated from other members of the XK family by an aggressive bodykit, featuring more pronounced vents, chin spoiler and sill treatment as well as that big rear wing. No word on pricing just yet, but we can expect full details on the car upon its reveal at next month’s Geneva show. Geneva will also be the location of some of Jaguar’s celebrations to mark the 50th anniversary of the E-type, which will continue throughout the year. Festivities kick off with E-type drives at the Parc des Eaux Vives in Geneva, where the original car was launched by Sir William Lyons in 1961. And you can read evo’s celebratory E-type drive, as well as see more pictures of the new Jaguar XKR-S, in evo issue 155, on sale Wednesday March 2. Jaguar XKR v Audi R8 v Ferrari v Porsche Jaguar XKR buying guide Jaguar XJ220 v Lamborghini Murcielago evo’s 2011 Geneva motor show coverage