Kia's first hot hatchbacks come in the shape of the 201bhp Procee'd GT and Cee'd GT, set for a 2013 Geneva show debut 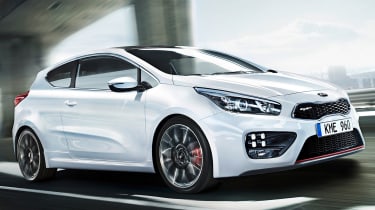 Kia has unveiled its first performance hatchback. The Cee’d GT – and its three-door Procee’d GT sibling – will debut at the 2013 Geneva motor show. Designed and due for manufacture in Europe, it’s the company’s first hot hatchback. It will take on the new SEAT Leon FR and VW Golf GTI. And with prices set to start at around £20,000, the Kia GT range will undercut them both. Power comes from the 1.6-litre turbocharged four-cylinder petrol used in the Hyundai Veloster Turbo, but with more power. The Cee’d and Procee’d produce 201bhp and 195lb ft, the former making them 17bhp healthier than their rival Korean. The 0-62mph time is 7.9sec for both three and five-door cars, while a top speed of around 135mph looks likely. A six-speed manual gearbox is standard. Kia hasn’t yet revealed suspension details, but we’ve been told little has changed, the standard front-drive chassis happily accepting a dose of extra power, despite the GT representing a near-70bhp rise over the current Cee’d range-topper. The brake setup is identical. Styling tweaks equate to bolder LED running lights, twin exhaust pipes, 18in alloy wheels and red brake calipers, while the interior benefits from a set of Recaro sports seats. The Kia Procee’d GT arrives in the summer, with Cee’d GT sales pegged back until later in 2013. Firmer details will be confirmed when the covers come off at Geneva.